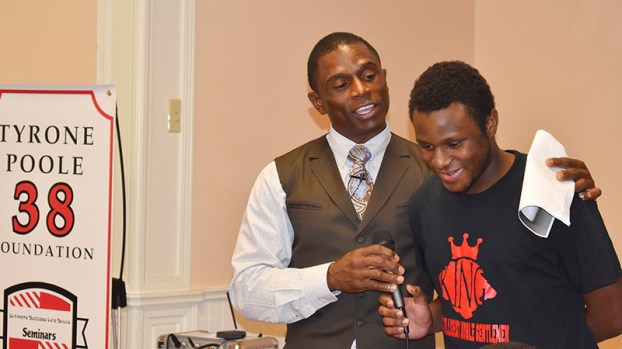 Poole spent time with the youth hosting various activities from skits on how to react in situations to outdoor exercise. The retired football player said that including fitness into the seminar is important because of how attached children are to technology nowadays.

“You can sit behind a computer and basically the world is at your fingertips,” Poole said. “It hinders the body at being the best it can be and if the body is hindered everything you need to have a healthy mind to be able to operate efficiently is kind of slowed down. I believe fitness plays a great role with success as well.”

The two-day seminar, titled “Telling my story? Tell it right” gives children stories and situations to work through with Poole’s guidance. Participants are given certificates after they finish.

He said he wants them to learn how life operates and how they can cope with its changes.

Poole said he hosted the seminar because he wanted to motivate children from his hometown.

“My family is here, my mom is still here, my roots are still here and just as I needed help when I was growing up young, I didn’t have the opportunities to meet a lot of great people,” he said. “These kids are just like myself. They want it, they are looking for it, they are looking for real people who just care. You don’t necessarily have to be a professional athlete, you don’t have to be a CEO.”

Poole attributes much of his success to the National Football League and the veteran players he met during his time as a defensive back. He said the principles he learned in the NFL are the same ones he is teaching the kids.

“The NFL actually does a great job in helping their players understand what life is like while you’re playing football and life after football,” he said. “That’s the same thing here. We have a mixture of kids, but they’re all learning from each other and want to be successful.”

Poole started his public speaking career by giving motivational speeches in 2011, something that would surprise his hometown friends, he said. One thing he has noticed is how the town hasn’t changed.

“I was quiet and shy when I was growing up in LaGrange,” he said. “LaGrange hasn’t changed that much, but it is growing.”

Poole developed the format for his seminar from his motivational speeches and is now ready to share his knowledge with the world. The retired football player said he will always hold a seminar yearly at LaGrange.

“This is the start of many, many, many seminars to take place. We’re looking to come back here annually,” he said.

If there was one thing that children could take from the seminar, he said he would want them to know that they control their own destiny.

“The only person that could stop you is person that you look at every day in the mirror,” he said. “Everything they need to be successful in this world they already have inside of them, they just have to be situated in a place where they can hear that they can do this.”

Poole said that caring for people is the start to becoming a motivator, something that he sees as his purpose.

“You just have to be a person of heart that cares for other people. And once people see that you care for them and you can help them to understand who they are, motivate them, inspire them then sometimes that’s all they need to go to the next level,” he said. “So that’s my purpose is to come back, to inspire, to motivate, to let them know that they are more than what they are.”