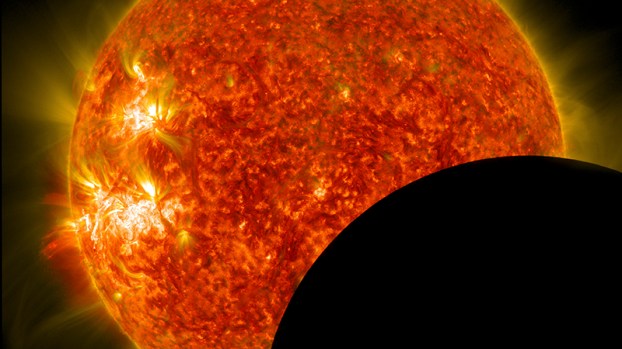 This image of the moon crossing in front of the sun was captured on Jan. 30, 2014, by NASA’s Solar Dynamics Observatory observing an eclipse from its vantage point in space. (Credit NASA)

Solar eclipse to be visible in LaGrange

The sun over LaGrange will be at least partially obscured as early as 1:05 p.m., and the partial eclipse will end at 4:02 p.m. The exact times may vary slightly depending on exactly where the eclipse is being viewed within the county. This solar eclipse will be the first total solar eclipse to cross the entire country, coast-to-coast since 1918. The total solar eclipse will begin in Oregon and will only be observable in a small section of Georgia near Clayton. The Rabun Gap-Nacoochee School will be one of the main locations hosting a viewing party for the eclipse in Georgia, though locations across the U.S. will host similar events for the once-in-a-lifetime event, which has inspired excitement within the scientific community.

“Eclipse 2017 provides an incredible opportunity to engage the entire nation and the world, inspiring learners of all ages who have looked to the sky with curiosity and wonder,” said Steven Clarke, director of NASA’s Heliophysics Division in Washington in a press release.

Science professors from LaGrange are likewise excited about the event.

“With a filter, I should be able to make out the mountainous features of the moon’s topography as sunlight shines through the valleys of the moon. This effect is known as Baily’s Beads.”

NASA strongly recommends using eye protection such as  number 14 or higher welder’s glass, pinhole projectors or a projecting telescope when viewing a partial eclipse since direct sunlight can cause eye damage. A list of reputable vendors of solar filters and viewers can be found at eclipse.aas.org/resources/solar-filters. Sunglasses will not provide enough protection to prevent eye damage and should not be used to view the eclipse.

“I would recommend buying filtering glasses from a reputable vendor,” Ludwick said. “Any exposure of direct sunlight on the eye, whether the sun is eclipsed or not, is harmful to the eye, and the damage can accumulate over time. So, anyone who wants to look at the sun while it is eclipsed should be sure to wear the correct grade of filtering since an imitation, cheaper product may not provide adequate protection for the eye… For viewers in LaGrange, the eclipse will be partial and the sun will not be completely covered, so the glasses should remain on the entire time to avoid eye damage.”

The forecast in LaGrange will not be clear until closer to the time of the event, but if cloudy weather blows in, the eclipse will still be viewable online. Online viewing will also be a great option for anyone who forgets to order protective eye wear in time for the event. However, if the weather remains clear, then there will still be an incredible sight even outside of the eclipse’s path of totality.