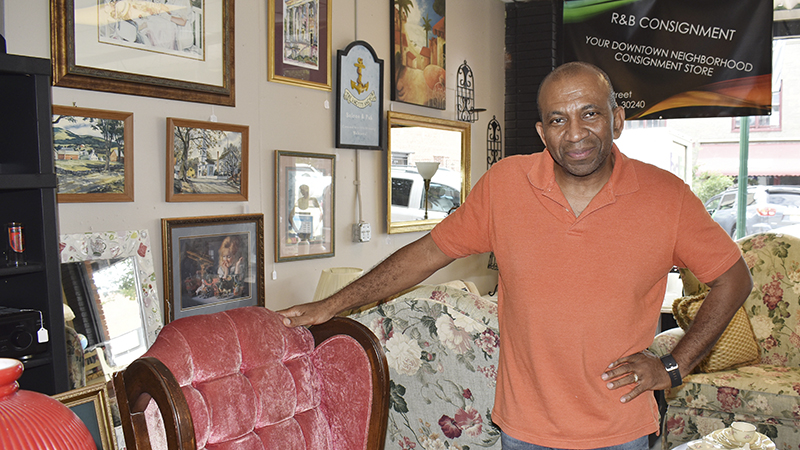 Ron Willis poses for a photo in R&B Consignments at 127 Bull Street. The store carries a variety of antiques and collectibles. (Gabrielle Jansen | LaGrange Daily News)

LaGrange resident and retired veteran Ron Willis is buying and selling unique and uncommon items at his downtown consignment shop, R&B Consignments. Willis said he decided to open up a consignment shop in LaGrange after retiring from the U. S. Army in late 2016.

Willis and his wife, Beverly, decided to move to LaGrange after setting up the nondenominational Renew Church on North Lewis Street. Willis said that they have also set up other churches in Washington, South Carolina and Louisiana.

“We have started some churches before,” he said. “This is our fourth church that we started.”

A member of the Buy Veteran small business program, Willis opened his store in March.

He said he likes LaGrange because of its size.

“My favorite thing about LaGrange is that it’s not a very large town,” he said. “It’s a good fit for me. It’s not a little town, a lot of stuff goes on you just have to go out and find stuff to do.”

A retired master sergeant, Willis said that throughout his career he saw going to yard and estate sales as a hobby. He now enjoys it as a full-time position.

“It’s work, but it’s enjoyable work,” he said. “I also wanted to have a place where people can come and get used goods at a good price.”

Originally from Columbus, Georgia, Willis said he joined the army a year after high school. He said he served 29 years on active duty and ten years with the National Guard in the reserves.

Wills said he worked as career counselor, a supply sergeant and supervised soldiers. Willis said he was stationed in Panama and around the United States including places such as Washington, Ann Arbor, Michigan, Columbia, South Carolina and New Orleans, Louisiana.

“I kind of like being all over the place,” he said. “Every place that I went to has something nice about it.”

Willis said his store sells a range of unique items, including Victorian furniture, stoves dating back to 1930 and 1940 and modern clothing. He said customers looking for those items are attempting to complete their collections or want to see something different.

Willis said he prices things fairly for the sake of the community.

“I believe if I sell things at a decent price, people will come back and let other people know about your business,” he said.

Wills said he hopes his store will grow with the rest of LaGrange’s downtown.

“I want people to come back downtown and discover what is downtown and see what is new in town. I believe it is time for LaGrange to grow and I want to grow with it,” he said.

“I’m looking for good things to happen, it’s about time for downtown to explode and I want it to explode.”

R&B Consignments is open Tuesday through Saturday from 10 a.m. to 5 p.m. and is located at 127 Bull Street.

This fundraiser is for the dogs