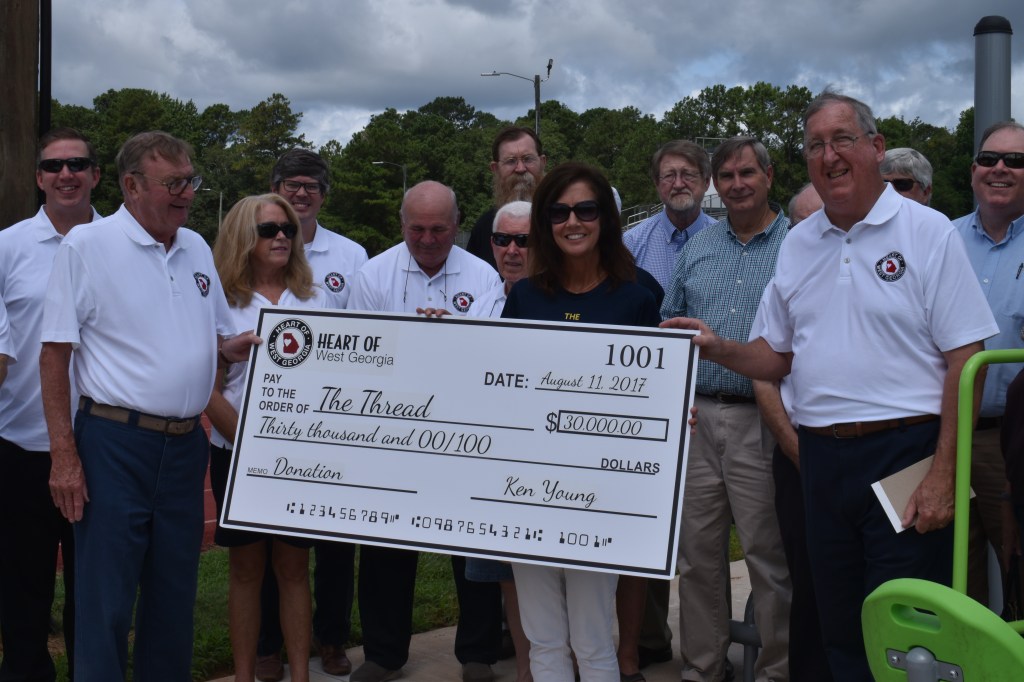 The Heart of West Georgia presented a check worth $30,000 to the Friends of the Thread on Friday. The money was raised for new exercise equipment placed at the football field and walking track of Granger Park.

Heart of West Georgia Board Member Nathan Swanson said the group raised the money for the equipment through their annual golf tournament in April.

“It’s a great, great privilege to donate this,” Swanson said. “The community came together through fundraisers, the community raised this money basically, we’re giving it back to the community.”

The new exercise equipment replaced some of the equipment installed over 20 years ago, according to Friends of the Thread executive director Natalie Hale.

“The equipment that used to be here had been here since the Olympics in 1996, so it was in need of repair and replacing because this is the most-used park in Troup County,” Hale said.

Swanson said the donation was in line with the Heart of West Georgia’s values.

“The Thread is a great community project, it’s going to increase over time and have outdoor [things] for all kinds of people,” he said. “We wanted to be able to help support that and give outdoor kinds of equipment because we do try to give grant money to entities that will promote cardiovascular and obesity awareness, along with women’s health.”

Friends of the Thread President Bob Goehring said it was great that other organizations in the community are supporting The Thread.

“It’s tremendously gratifying to see all the folks come forward and think of ways that they’re doing that The Thread brings to the community,” Goehring said. “And there’s so many people and so many organizations that have similar goals in mind: that is to create a healthier community, a more active community, a more outdoor community a more integrated community in every way and a community where we can get around without cars.”

As for upcoming plans for The Thread, Goehring said segment two will be open in almost six weeks. Hale said the group is not particularly looking at fixing up anything else around The Thread at the moment.

“As the trail goes along we’ll see things that need improving and we’ll have volunteers step up and donate,” she said.

Currently, the group is just focusing on what the Heart of West Georgia gave to them, Goehring said.

“We’re sort of immersed with what’s right in front of us, [the Heart of West Georgia] did the whole thing,” he said.