A colorful way to spend a Saturday 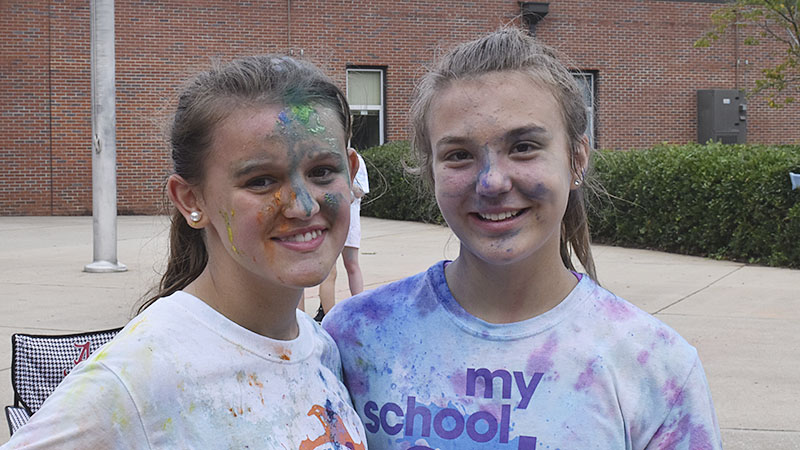 Charley Harry and Natalie Figiel show off their colorful shirts after the run on Saturday. --Gabrielle Jansen

The money that was raised at the event will go toward paying for the teams’ travel expenses.  The board of education only pays for a certain amount of miles, according to assistant coach Christie Kelley.

“It helps raise money for us during the season for transportation to the meets,” Kelley said. “If we go over 150 miles, we have to pay for that transportation.”

According to assistant coach Peter Anderson, the fundraiser brought out about 50 runners and 50 volunteers. The event also helps build team spirit before the school year really gets underway.

“Kids love getting colors on their coaches and getting color on themselves and that just adds excitement,” Anderson said.  “Rather than a run, (this) lets us draw people in from the community and makes something that may be threatening to people who might not be runners, and just want to have a good time (available).”

The run started and ended at the school’s flagpole, the usual running course for the team.

“This is a tough course, it’s got a nice hill on the backside called ‘Tiger Mountain’ that separates the dedicated from those that just come out to stay in shape,” he said.

“It felt good, it’s definitely the only time it’s going to happen this season,” Fuller said. “Any running is going to help condition.”

Kelley said the team was given donations from Emory Clinic and the Walmart Distribution Center. Emory also donated water bottles for the runners and volunteers. The weather turned out to be favorable for the run.

“It’s a very nice morning, we had a little bit of overcast (skies) and not too humid, so it felt great,” head coach Dallas Reagan said. “We had a good showing. It went really, really well.”

According to Anderson, next year’s Color Run will be held on the first weekend after the school year starts.

“We were hoping to draw people while they were excited to come back to school,” Anderson said. “We had a lot of former runners out here and it was a really nice homecoming in a kind of sense.”

The cross country season starts with the first meet on the second weekend of September.