In the market for a good time 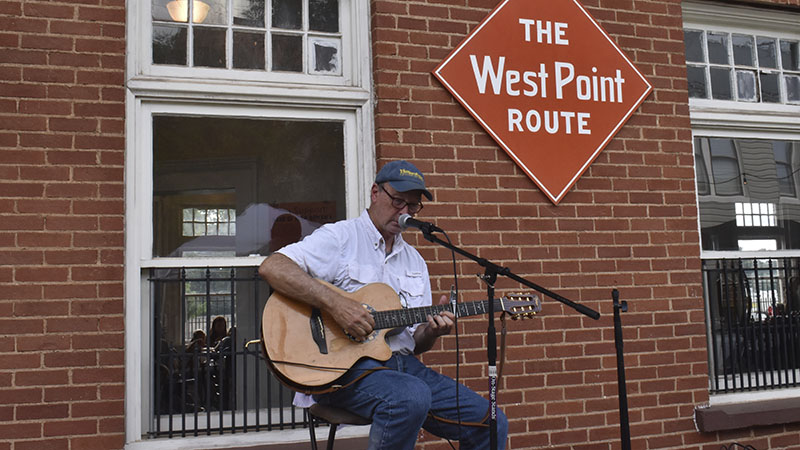 Ralph Lynch performs an acoustic number on a stage outside Station Coffee House on Saturday.--Gabrielle Jansen

Partner of Pioneer held its fourth monthly Market Day in Hogansville on Saturday.

The event in downtown Hogansville takes place in part of the old train depot, where the Station Coffee House is open along with arts and crafts booths that are stationed on the street.

The event included 32 booths from food vendors, artists and craftsmen along with live music, according to Jake Ayers, who coordinated it all.

A Pioneer cofounder, Ayers said the event was created to bring people into Hogansville.

“Pioneer is an organization that is hitting up all of the development ideas we’re trying to do here in Hogansville,” Ayers said. “Basically, the whole idea behind market day is to have a central location where all different types of artists, craftsmen and food vendors can bring their stuff and have a good outlet to share it with people.”

Ayers said the monthly event is one of Pioneers’ strategies for economic development for downtown Hogansville.

“Market Day is one of the strategies we came up with to bring people to town,” he said. “So now people from Atlanta, Peach Tree City, LaGrange, Newnan, they’re all flocking to town once a month.”

The event featured music by Ralph Lynch, Ethan Leak and Cameron Bogan, and All the Rest.

Franklin resident and Wood N Whimsy co-owner Allison Knott said the monthly event has a cool feeling to it.

“It’s fun coming here because this is my favorite market to go to,” Knott said. “Just seeing the people that are here and just the revitalization of the town is awesome.”

Atlanta resident Meghan Reap said it was good to see all of the kinds of different vendors.

Corinth resident Saglia Mitchell said she enjoyed the indoor pub and the size of the event.

“The best part of it is that you can go inside and get a beer and walk around and enjoy yourself right here in their itty-bitty area and I love that,” Mitchell said. “[My husband and I] have been meeting new people while we are here, so that’s a good thing.”

Ayers said the monthly event will continue every second Saturday for the upcoming months until they take a break in November. Pioneer also plans to host a Christmas market in December to coincide with Hogansville’s Christmas Parade.

Ayers said Pioneer is surprised by how well the monthly events took off.

“It’s been a lot more successful than we would have even thought or hoped or prayed that it would be,” he said.

More information about Pioneer, Market Day and other events can be found at pioneergeorgia.com.