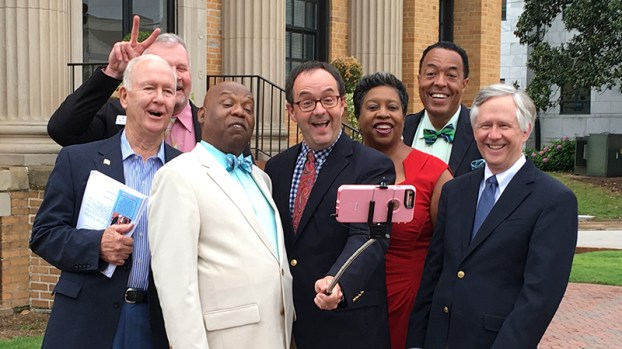 LaGrange competes for the best #CityHallSelfie

Teens won’t be the only ones taking selfies today, in fact some of the best photos may come from local politicians.

The LaGrange City Council gathered in front of City Hall following last week’s city council meeting in order to take a group photo for a statewide selfie day. The event will take place around the world, but Georgia groups are making sure that the peach state is well represented in Twitter hashtags today.

“The Georgia Municipal Association is having a selfie day on Aug. 15,” Mayor Jim Thronton explained during the city council meeting last week. “We, of course, are all very big supporters of GMA.”

While GMA is encouraging local governments and individuals to post selfies, Engaging Local Government Leaders is the group that will actually sponsor the contest in an effort to recognize the work done by government at a local level. Additionally, the selfie day will also give citizens a great opportunity to check out the updated landscaping at LaGrange’s city hall.

ELGL is a local government professional association that connects, communicates and educates people about local government public service. Besides just having fun however, the selfies at city hall will also be eligible for awards.

“ELGL will be reviewing all of the tagged photos and awarding people for a variety of different categories from ‘most creative’ to ‘most selfies taken by one person,’” a press release from the city said. “LaGrange is competing for bragging rights.”

The winners will receive selfie sticks.

In order to enter, residents, city staff, elected officials, friends and/or family should take a photo in front of city hall, which is located at 200 Ridley Ave in LaGrange — or 400 East Main Street in Hogansville — then post the photo on Facebook or Twitter with the tags @gacities (on Twitter) or @Georgia Municipal Association (on Facebook) and @ELGL on all networks. The hashtags #GaCities, #CityHallSelfie and #ELGL are also recommended.

The following categories will be considered for selfie awards:

City Hall Selfie Day begins Tuesday at midnight and goes through 11:59 pm. For more information on #CityHallSelfieDay go to Elgl.org.

The Courtyard by Marriott in downtown LaGrange will have a 24-hour Starbucks open to the public when the hotel opens... read more