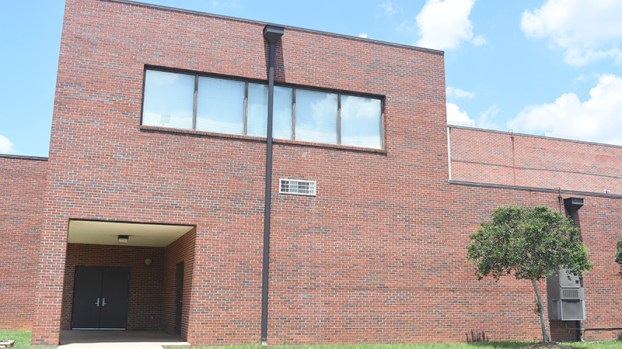 Troup County High School is getting a new gymnasium. The current gym is shown above. (Daniel Evans | LaGrange Daily News)

The Troup County Board of Education debated Monday whether it can afford to include indoor practice facilities at gymnasiums planned for Troup High School and LaGrange High School.

The board approved a $10 million budget for each gymnasium at an earlier meeting, but John Radcliffe, assistant superintendent for maintenance and operations, said during Monday night’s work session that the construction will cost an estimated $12 million apiece if the practice field is included.

“I’ve talked to the architect, I’ve talked to the contractor and to get back to $10 [million] you basically would be eliminating the indoor practice football [field],” Radcliffe said. “That’s a $2.78 [million] for architectural estimate for LaGrange and it’s about the same for Troup, so essentially, we can get to the $10 million mark, but you would eliminate the indoor practice field.”

Radcliffe is ready to accept bids for the construction work, but the board was hesitant to move forward at the price discussed. The $12 million estimate does not include land acquisition, Radcliffe said.

Radcliffe suggested the system send out the designs with the indoor practice field as an add alternate, meaning it could be removed later. He said they have reduced the designs to basic buildings, trying to cut down on cost as much as possible.

“There’s no fluff in this anywhere,” Radcliffe said. “These are basic buildings at this point, structured steel buildings.”

“Now we are spending half of our SPLOST on two gymnasiums, well above what we set out to do,” Hancock said. “That’s a very material decision.”

Radcliffe said if the board wants to construct the buildings they have discussed publicly, then the cost is what it is.

“I fully agree with that but we also told them we’d fiscally manage a budget. There’s two sides of a coin and you can’t spin one side,” Hancock said. “Everyone wants the facility. I want the facility, but we have gone from $18 million to $24 million-plus. We have to be adults and figure out how do we do that.”

Board member Brandon Brooks asked if the school system could simply tell the architect that all it had was $10 million to spend.

“Can we not go to the architect and say ‘sir, we have $10 million, shrink the square footage, if we are looking at square footage pricing,’” Brooks said.

Radcliffe said the situation is not that simple, if the board wants the school to be able to host regional events.

“We are probably as short as we can get [on the indoor practice facility] with 35 yards plus an end zone,” Radcliffe said. “On the interior, a basketball court is a basketball court. I don’t make that up. The capacity for the seating you can change. You can go to 1,100. When you do that, you won’t be able to host a regional event. I think you have to have 1,800 seats to host a regional event.”

Board chair Ted Alford said the board needs to consider that Callaway High already has an indoor practice facility.

Hancock asked Radcliffe where people would park at the high school for an 1,800 person event.

“We are building a destination event with no parking — well, constrained [parking],” Hancock said.

Radcliffe said the school manages to get over a thousand students inside every day currently.

“We are putting 1,100 kids over there every day right now,” he said. “Without building a parking deck, I mean let’s face it, LaGrange High School is on seven acres. I can’t make this stuff up. That thing has been built, and built and built on where you’re landlocked wherever you go. In order to do anything, we have to buy property or we have to build it on stilts.”

Radcliffe said no other projects would be cut to make up for the increased cost and that there is enough SPLOST funding to build the new elementary school and both gymnasiums. HVAC projects at Long Cane and Callaway Elementary Schools were moved into E-SPLOST IV.

In the E-SPLOST passed by the public, the system also has $1 million earmarked for land acquisition, money that could be used for land for the gymnasiums.