LaGrange Academy and Lafayette Christian School are allowing excused absences and for parents to check students out from school early for the solar eclipse on Monday. Lafayette Christian will dismiss school early for the eclipse, according to Headmaster John Cipolla. The elementary school will release students at 1:50 p.m. and the upper school will release students at 2 p.m, he said.

“It’s a great, unique opportunity that we have to experience an eclipse that obviously isn’t going to happen anytime soon or in our lifetimes potentially. We want the kids to know about it and experience it, but also to do it safely,” Cipolla said.

Lafayette Christian is releasing students early so they can view it with their families. The school will also broadcast a live feed of the eclipse at its gym for students who are staying for the whole day, he said.

“We’re doing an early dismissal so that the children and the parents who are able to enjoy that can do it together,” Cipolla said. “Those who do not dismiss early, we will gather at the school indoors and we will watch the solar eclipse on a live feed. After it’s over, the students will report to their normal after school activity or go home.”

Meanwhile, LaGrange Academy will host group activities during the partial eclipse, including an outdoor watch at the baseball fields for children with signed permission slips, according to English teacher and director of college counseling Teresa Krizay.

“Our kids are actually going to go outside and watch it. We have eclipse glasses for all of the faculty and the students,” Krizay said.

The school will host activities for children outside, including snow cones and a demonstration of what happens to a chicken during an eclipse. Children who do not have signed permission slips will be able to view the eclipse indoors, she said.

“We’re going to start going out probably about 1:30 p.m. and there’s going to be activities out there,” she said. “We’re going to have stuff inside too for kids whose parents don’t want them necessarily to be outside. So, we’re going to be broadcasting the eclipse live inside as well.”

Krizay said the high school students are pairing with NASA to collect data during the eclipse.

“They will be collecting data for NASA regards to the timing, the arc, all of that,” she said. “They’ll also be monitoring bird activity as well for NASA during that time period.”

As for dismissing students, Krizay said the school will give out the protective glasses for those getting picked up by their parents.

“They’ll be released wearing eclipse glasses just in case,” she said. “As far as for our kids who can drive, once the eclipse starts, they will not be permitted to leave.”

Troup county public schools clarified earlier this week that they are not allowing students to view the eclipse outside for safety reasons.

However, parents can check out their children early and receive an excused absence. 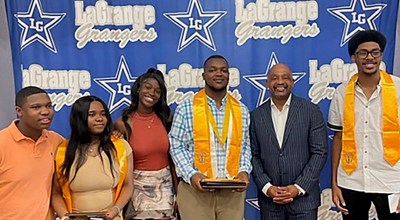