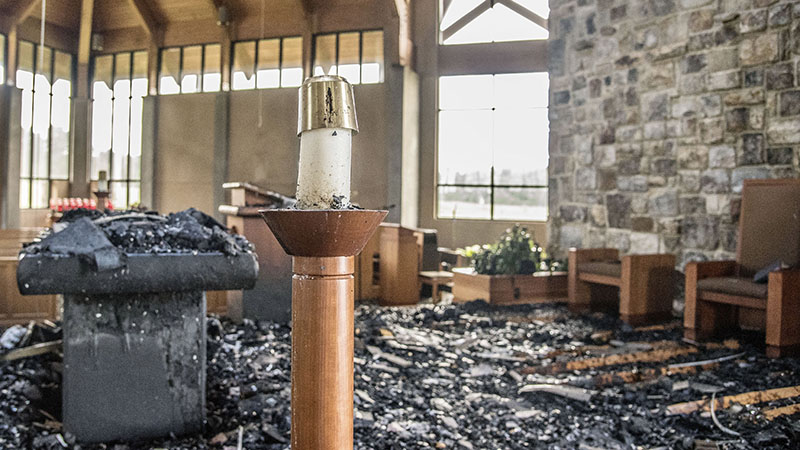 Christ the King Catholic Church in Pine Mountain was partially damaged after lighting stuck the top of the building, which started a fire on Monday night.

According to facilities and building manager Mike Gibbon, the lighting hit the church about 45 minutes after they held a mass around 8:45 p.m.

The church’s priest, who lives right next to the building, heard the lighting strike, but was unware it set the parish on fire, Gibbon said.

“It just so happened that the fire trucks of the volunteer fire department here were on the way to another call and passing by our church literally within a few minutes of the lighting strike and they realized, ‘holy cow, this church is on fire,’” he said.

“So, they pulled in the gate and notified the pastor that ‘your church is on fire’ and proceeded to work the better part of all night long to contain the fire. They had a couple of additional flare-ups the next morning and they put those out.”

About 8 a.m, the VFD left the scene, Gibbon said.

The front third of the church received the most damage due to the roof collapsing over the altar and the water damage caused from putting out the fire.

“The cupola area burned and some surrounding roofing area and, of course, then large portions of that and the roof itself fell into the altar area,” He said. “The front third of the church suffered the most damage and of course the associated water damage from the firemen putting out the fire creates the usual mayhem associated with things like that. The church, it could have been a lot worse as far as damage is concerned, between that and the water damage, the soot and everything has rendered it unusable for the foreseeable future.”

Gibbon said the parish has received a lot of help from the community since Tuesday.

“We were very fortunate that we have a parishioner here who works for a very well-respected restoration company. He was on the job literally the morning after the fire and has been on it ever since,” he said. “They have gotten most of the debris out of the church.”

While restoration is currently underway, the church is now using its parish hall to hold services on Saturday and Sunday, he said.

“We essentially turned our parish hall into our church. We were able to salvage enough things from the church and the altar area to be able to do that,” he said. “We kind of had an all hands-on deck gathering yesterday. We set it all up with chairs, put a makeshift altar together, got a little portable organ out of the old church, and we’re ready to have our scheduled services this weekend as we normally would.”

The church was able to hold a mass at the parish center on Tuesday.

Restoration is coming along every day, Gibbon said.

“They are in the process of removing the remaining portions of the cupola that are scorched and still standing and when they remove that debris, most of that portion will be done and then they already have heaters drying out the remainder of the church as we speak here today,” he said. “The restoration people are basically doing their thing and keeping everybody out. As far as setting up the hall to be our church going forward, all of our parishioners responded tremendously, and we have more than enough labor.”

Gibbon said the church does not know the extent of the cost of damage or how long it will take to repair the damage.

“A lot of it is dependent on the estimate the structural engineers have regarding the nature of the damage and how extensive it is from a structural standpoint and that will dictate a lot of the cost as far as repair,” Gibbon said.

As for what the community can do for the church, Gibbon said it can offer prayers for the restoration.

“There’s really nothing they can do,” he said. “We’re in good shape. It’s just a day to day thing now trying to get it cleaned up, and we have contacted the architects and the building company. All the insurance companies have been notified, and it’s just a matter of coordinating that effort going forward to get it rebuilt as soon as we possibly can.”