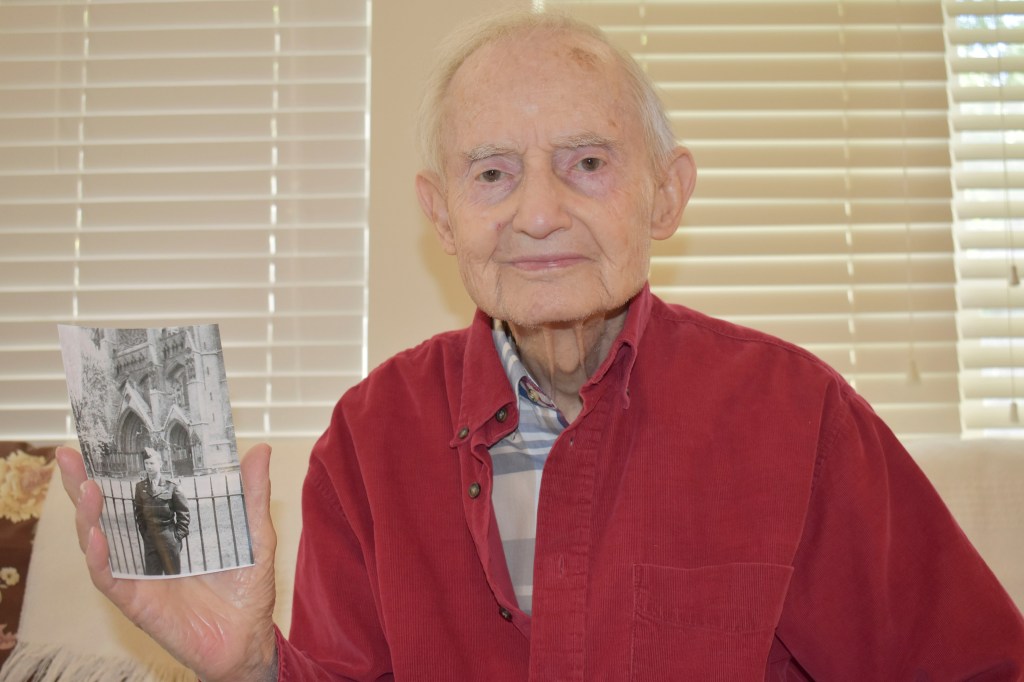 Hugh Headrick holding a photo of himself in England from World War II. --Gabrielle Jansen

Getta Headrick talked about fighter planes for her husband, Hugh, as he looked through an old binder of photos and papers from his time serving in the Army Air Force during World War II.

“It had the nickname because it was such a tough, bulking plane, they called it ‘The Joke,’” she said.

Hugh was drafted in 1942 when he was a freshman at Tusculum College.

He flew strafing and dive bomber planes for the 53-fighter squadron of the 9th Army Air Force.

“Strafing is just shooting. We had eight machine guns and then we could strafe trucks or encampments or whatever,” Hugh said.

Getta said her husband flew in small bomber planes because of his size.

“[Bombers] could not be flown by great, big tall men. He was just barely tall enough though for the limit,” she said.

As a pilot, Headrick flew 59 missions across Europe, including at the Battle of the Bulge.

“He had flack and threats, but he never was downed,” Getta said.

Headrick’s last mission was concluded a week before victory in Europe.

Hugh said he would fly his plane close to others for protection during the war.

“As with other fighter bombers, we moved often to keep base as close as possible through the battle lines. This gave the planes more time in the air for more effective missions and saved gasoline,” he said.

After the war, Headrick went back to Tusculum in 1946 and met Getta. They were married a year later and had two children.

“I was in my second year when he came back and we met and were married a year later,” she said.

“His family never had a car because his father could walk to his office at the railroads. So, with his mustering-out pay, he bought a baby blue Oldsmobile convertible. When he bought it and the man gave him the keys, he went ‘Would you show me how this thing starts?’” she said.

After college, Headrick was in the reserves when the Korean War started.

By then, he was let out of the military as a first lieutenant.

“He got called and we were expecting our first baby,” she said. “He had not been able to keep up any flying time during college and so he didn’t have to go.”

Headrick went on to have a career as a creative director for an ad agency in Atlanta before moving with his wife to LaGrange in 2002.

“He had quite a good career in Atlanta next to the top of the Peachtree building,” Getta said. “Our son had ended up here, so as we were getting older, we didn’t want to be so far from family, so we moved in 2002.”

Most of Hugh’s military memorabilia can now be found in museums across the country, he said.

“I have a few [things] in the United States. They’re all over,” Hugh said.

Troup High School giving away car at end of…