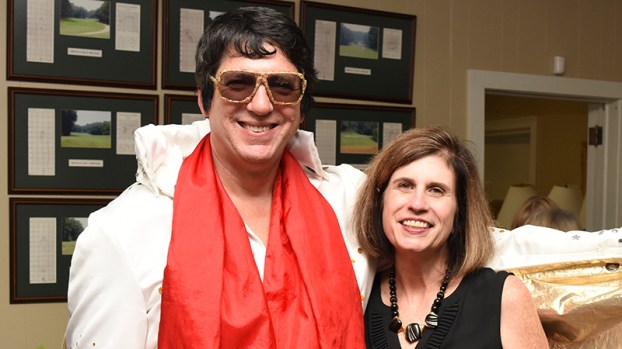 Elvis impersonator Van Barnett poses for a photo with Lisa Boatwright, one of the organizers of the annual Fur Ball. --Daniel Evans

The LaGrange Troup County Human Society does not know the total funds raised from the 16th annual Fur Ball, but the preliminary number is is believed to be approximately $20,000.

Executive Director Mandi Bono said the event had more than 120 people attend. Last year, the event raised $24,000 and this year is already close to the same, with all of the money raised not counted yet.

The money raised is going toward spaying and neutering the shelter’s dogs, she said.

“The money that we raise goes toward the spay and neuter cost as well as vaccinations and microchipping for the dogs that we adopt out,” Bono said.

The annual fundraiser provides the cost for the shelter’s services, along with donations, she said.

“The Fur Ball is really the only fundraiser that we do, so that funds almost all activities during the year,” she said. “That really funds everything we do.”

The event’s theme was Viva Paws Vegas and included a silent auction along with an Elvis impersonator and the band Lisa and the E-Lusion.

“We had a new committee working on it this year, people that had not been involved in previous years and stepped forward this year, we’re working with it,” she said.

“From start to finish, it was a wonderful event for all of us and for the dogs.”

Bono said the shelter is grateful for the public support from the event.

“That event and the donations we receive are what allows us to do what we do for the animals,” she said.

When Dr. Richard Ingram began asking locals about the identity of the statue on LaFayette Square several months ago, he... read more