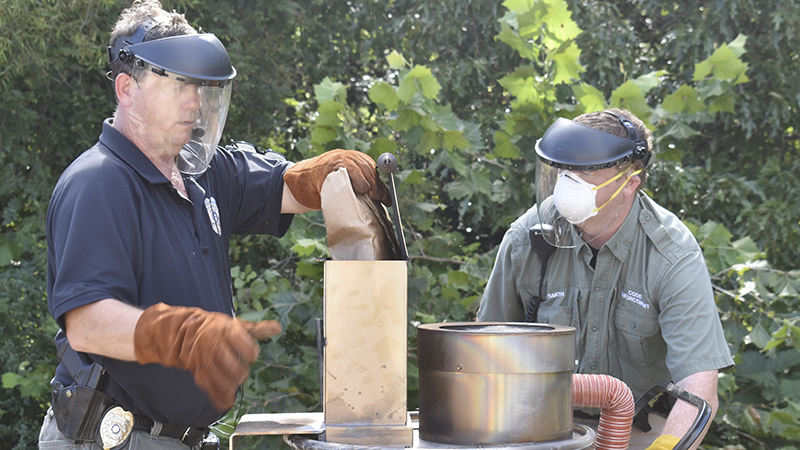 Jeff Sheppard with the Hogansville Police Department demonstrates how to use the departments new drug incinerator as Gabe Smith looks on. --Gabrielle Jansen

The Hogansville Police Department is now using an incinerator to burn prescribed and illegal drugs. At a public demonstration of the incinerator held Thursday, administrative coordinator Sgt. Jeff Sheppard said its purpose was to allow for safer drug disposals by the department.

“There’s nowhere for us to safely dispose of the narcotics once court cases are over, within reason. The collection of narcotics that we have that are waiting to be disposed of, the environmental effects of doing an open burn, if we have to take it to another location, the cost of transporting because you have to have two officers to do it,” Sheppard said. “Open burns aren’t efficient enough to burn everything.”

The department planned to buy an incinerator for over a year, according to Chief Brian Harr.

“This is a project that we probably started about 13 months ago,” Harr said.

Safe prescription drug disposal has additionally been a problem for the town, he said.

“The issue is that there no place in a small community for people be able to dispose of after they lose a loved one or just after the medication’s expired,” he said. “The water source is not good, but people go to dump them down the toilet and that creates a problem for our water source.”

The incinerator, which cost $3,900, was paid for through grants and the department’s drug seizure funds, Sheppard said. Grants came from the city, the Troup County Prevention Coalition and the Walmart Distribution Center.

“For the citizens of Hogansville, out of pocket was nothing,” Harr said.

“[We’re] excited to be here today, to see all the planning come to fruition and this available for our community and for our law enforcement to use,” Lawson said. “We like this as well because it’s environmentally friendlier.”

Sheppard said the incinerator can burn files and papers that need to be destroyed.

“This burns everything, it gets rid of everything residual,” he said. “We have tested some paper. It serves a double purpose: we can destroy the files that need to be destroyed, using them as fuel to heat the incinerator to burn the drugs.”

Prescription drugs that need to be disposed of due to expiration can be taken to any drug drop-off box at local police departments, Lawson said.

“Community wide, we have a drug drop off box at every law enforcement site,” she said.

Sheppard said the boxes will collect liquid medications that also need to be disposed.

“It’s basically for the medicine of people who are deceased and the family doesn’t know because some of the people on hospice are given liquid morphine,” he said.

The incinerator will also be available to other departments in the county, Sheppard said.

“We’ve offered it to all the law agencies in Troup County,” he said.

“We’ll be able to come here and burn our drugs here too instead of taking them where we normally take them, which is usually far away. Since they’re closer, we’ll be able to burn them more often,” Miles said. “I am just very grateful and thankful to Hogansville for doing this and allowing us to use it.”

Harr said the incinerator is bringing positive change to the community.

“The program has been going about a month now and we’ve had the box fill up one time now, so it’s a win for the community,” he said. “[The other police departments] face the same issues we are facing, if the use of this is going to be more efficient, then absolutely we’ll open it up to them.”