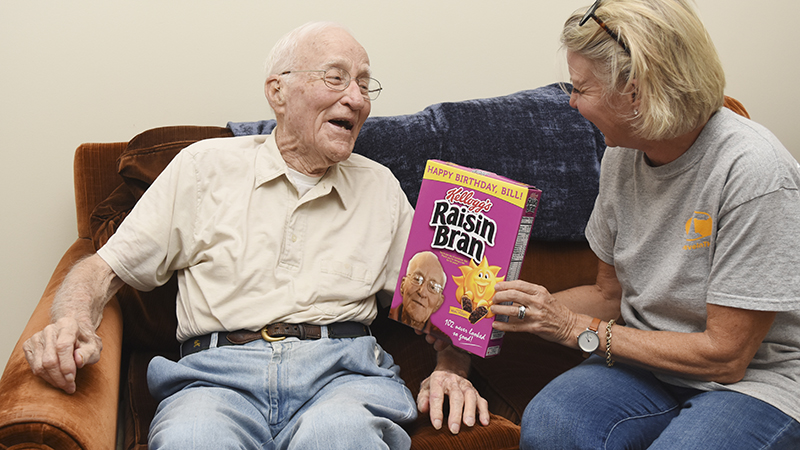 World War II veteran Bill Addison reacts as he sees his face on a box of Raisin Bran cereal. Kellogg’s sent the box for Addison’s 102nd birthday, which is today. --Daniel Evans

If you ask 102-year-old World War II veteran Bill Addison, a bowl of Kellogg’s Raisin Bran cereal every morning will do more than just keep the doctor away. He’ll tell you it’s part of the secret to a long life.

Addison is celebrating his 102nd birthday Saturday at Vernon Woods Retirement Home, and he’ll be honored by the American Legion for being the oldest living World War II veteran in Troup County. He’ll also be given a special box of Raisin Bran cereal, which Kellogg’s sent him for the special occasion.

The box features Addison’s face next to the familiar Raisin Bran sun character and it includes several special messages.

Addison was given the box Friday by his daughter Luann and he couldn’t have been more surprised.

“Oh my goodness,” Addison said with a laugh when he first saw the box.

Luann’s friend, Charlie Vincent, met Bill for the first time on Friday, but you would’ve never known it based on how hard Charlie has worked over the last few weeks. It was actually Charlie who contacted Kellogg’s and let them know about Addison’s love for Raisin Bran. When Kellogg’s heard about Addison’s birthday celebration coming up, they overnighted the box featuring his face, just to make sure it got there in time.

Addison joked that he should try to get a contract with Kellogg’s.

The Highland Home, Alabama native attended the University of New Mexico and earned a bachelor’s degree in English.

He tried several times to join the Army Air Force, but was turned down due to his eyesight.

Eventually, he got in contact with the right person and was able to get in.

Addison was stationed at Gunter Field in Montgomery, where he worked in the pharmacy there during World War II.

“I stayed right there until the war was over,” he said. “I worked in the pharmacy.”

He has a huge poster behind his couch of pictures shaped into the number 100 — a memento he was given for reaching 100 years of age.

On Saturday, he’ll get a chance to celebrate his 102nd birthday with 35 family members, and the American Legion will honor him for all he’s accomplished.

More than likely, during the celebration someone will stop and ask him the secret to living such a long life.

Staying in great shape is obviously part of it. He played golf for 50 or 60 years, including making three hole-in-ones, with the final one coming at age 89.

He threw out the first pitch at a LaGrange College baseball game earlier this year.

“He exercises here, he does all the exercise classes. He walks around the parking lot,” said his daughter, Luann.

But if you ask Bill, the secret to living so long is much simpler than all that.

That and a bowl of Raisin Bran every morning.