Reaching out to the community 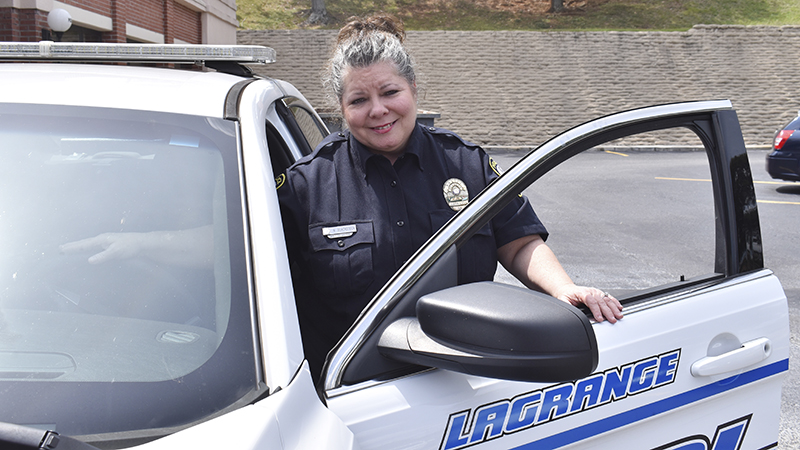 Officer Natalie Blackstock gets out of a patrol car at the LaGrange Police Department. (Gabrielle Jansen | LaGrange Daily News)

After serving with the LaGrange Police Department for almost 22 years, some may know Natalie Blackstock as a patrol officer, as a social service case worker or even as a hostage negotiator.

“I wear a lot of hats,” Blackstock said.

Blackstock has also worked as a D.A.R.E. officer and currently trains officers for the Crisis Intervention Team, along with teaching senior citizens for the senior citizen police academy.

“I covered the crime beat here in LaGrange. I did the LaGrange City Council. I covered that for years. I did the Troup County School Board, just the usual stuff,” she said. “I really enjoyed it, there were really good people that I worked with.”

In fact, the crime beat was her favorite aspect of the job. She said she liked including officers’ names in the articles, and said police often clipped those pieces out of the newspaper.

“I always enjoyed covering the city police,” she said. “I remember a lot of them would come to me and tell me they clipped the articles out.”

Blackstock’s career took a turn when she covered a car crash.

“One of the reasons I decided to join the force was a traffic fatality that occurred. It was a head-on collision and two people were killed instantly,” she said. “There was a third victim that was in the backseat of the car, but because the backseat was flipped down I didn’t know she was there. It was just quiet and I heard moaning from the backseat of the car and I couldn’t do anything.”

Wanting to help the third victim but not being able to do so made Blackstock realize she had a different calling.

Blackstock is not the only member of her family to serve in law enforcement. Her son, Gabe Smith, is the code enforcement and animal control officer in Hogansville, she worked with her fiancée, Mike Belcher, for over 20 years at the department before he moved to the sheriff’s office for court services, and her brother is a sergeant for the Columbus Police.

“We’ve got the public safety pretty much wrapped up in the family,” she said.

Outside of police work, Blackstock said she loves the kindness of the citizens of LaGrange and loves watching the town change.

“Wonderful people live here. I would not have stayed all these years if it weren’t for the people here,” she said. “Seeing the town change from what it was to what it is now is astronomical. I just wish I could come back 50 years from now and see what it could possibly be.”