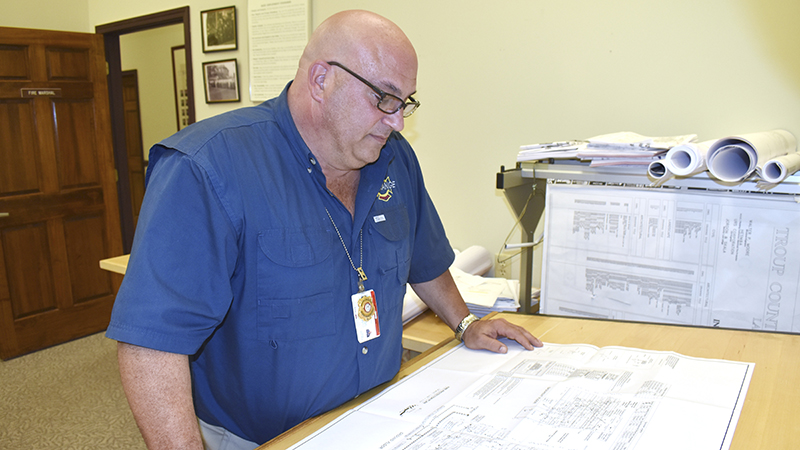 LaGrange Fire Marshal John Thomas moved to LaGrange in 1996 to work as a nurse, but a car wreck changed his career path. Above, he looks over plans for a building in LaGrange. --Gabrielle Jansen

LaGrange Fire Marshal John Thomas has always held an interest in firefighting even if it was not in Troup County. Previously from Anniston, Alabama, Thomas worked for the volunteer fire department.

“I was a volunteer fireman in Oxford Alabama, in the neighboring city to Anniston, when I was 18, 19-years-old,” Thomas said. “I always liked firefighting, and I tried several times (to join the department) in Anniston, but it never worked out as far as the way they do the hiring.”

Thomas moved to LaGrange in 1996 to work as a nurse, but quickly turned to the fire department as an emergency medical technician.

“I actually got a nursing job over here, but when I got here I had to have more credit hours for the state license of Georgia. I never worked a day as a nurse,” Thomas said.

The marshal got into prevention after suffering from broken neck and back injuries from a motorcycle accident in 2004.

“My wife, Lori, and I were getting ready to go to Thunder Beach, and I got home, I had just gotten off shift,” Thomas said. “We were at breakfast, and it was me and a lieutenant and a sergeant, and we were all going down together. I dropped her off at the house because I left something at the fire station. I was going back to the country club, and a car pulled out in front of me, and I didn’t have time to slow down. I ended up T-boning him, and that’s the last I remember of the wreck. I regained conscious once I ended up in the back of the ambulance.”

Thomas went through recovery for 14 months following the accident.

“It was 14 months of surgeries and getting back to where I could come back to work. The fire department was there for me, even that whole 14 months,” he said. “It was tough, (but) it was worth it.”

He said his favorite thing about the department is how they are like a second family, especially when he was injured.

“They’ve been my family for 21-and-a-half-years and have always been there for me. Inspector Chris Bartlett and I weren’t close or anything, but it shows what the fire department is,” he said. “He came over and brought me a whole deer, to where I didn’t have to worry about eating. I had food. It’s just like a family, you may not know how much you care about a person until they’re in need.”

Thomas came back to the department in 2005 as a fire inspector before becoming a marshal in 2013.

“I could not go back on the truck, and they had a position open in prevention, so I had to change my career (in order to) stay within the fire department,” Thomas said.

As a fire marshal, he does annual inspections of public buildings, including sprinkler and alarm inspections.

“Our main concern is the safety of employees, general public and firefighters going into a building,” Thomas said. “So, with code compliance, risk reduction and education, we try to prevent fires before they ever start.”

Thomas said he enjoys inspecting buildings, including continually going to ones that are being built, like the Courtyard by Marriot in downtown LaGrange and the Great Wolf Lodge.

“I like doing the final inspection,” he said. “I get to see everything from the beginning to the end. I do get excited when they’re finished.”

Outside of work, Thomas said he enjoys cooking on the grill and babysitting his three grandchildren.