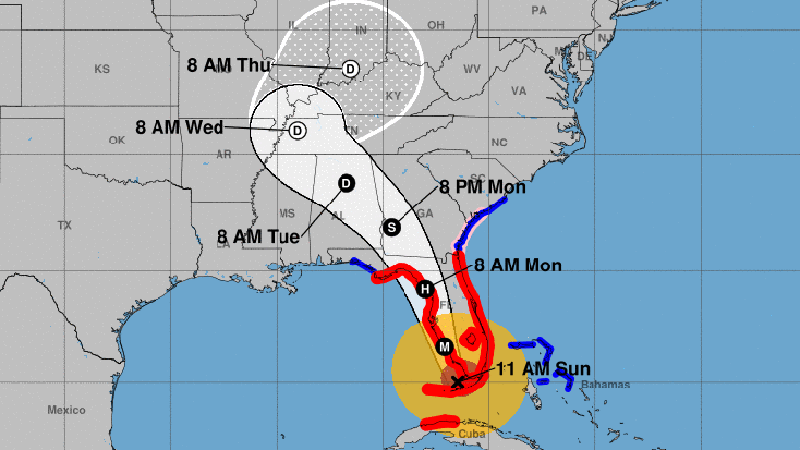 The latest update on Hurricane Irma is shown from the National Hurricane Center.

Hurricane Irma made landfall Sunday morning in Cudjoe Key, Florida as the storm began its northern turn, which will take it up the western side of Florida and into Georgia by Monday afternoon.

Irma is a category four hurricane and has already knocked out power for more than 1 million people in Florida. The storm has 130 mile per hour winds and powerful storm surges. By Monday evening, a much-weakened Irma will make its way into western Georgia, including LaGrange and Troup County. Irma is projected to be a tropical storm by that time, but it will still bring the threat of tornadoes, wind and rain.

Kyle Thiem, a meteorologist with the National Weather Service in Peachtree City, said Troup County can expect around 3-5 inches of rain and maximum wind gusts around 58 MPH. Troup County is currently under a tropical storm warning. A tropical storm warning means that winds from 39-73 MPH associated with a tropical cyclone are expected to impact the area within 36 hours or less, according to the National Weather Service.

Thiem said Troup County will see wind gusts up to 58 MPH, which is the minimum threshold for a severe thunderstorm warning.

“We are going to be experiencing some pretty strong wind gusts,” Thiem said.

Troup County is also under a flash flood watch from 8 a.m. Sunday through 8 a.m. on Tuesday.

“Tornadoes are also going to be a threat, depending on where the track lines up. Right now, it looks like the track has shifted a little bit further north whenever it crosses into Alabama, which is better than LaGrange,” Thiem said. “However with these tropical storms, usually anything on the right side of the track is going to be susceptible to at least a few tornadoes being possible.”

However, he said it’s still likely that there will be at least a few tornadoes in central Georgia.  Thiem said the winds will pick up early Monday morning in Troup County.

“We’re expecting wind gusts over 40 MPH [Monday] afternoon between 3 p.m. going into 8-9 p.m. That late afternoon, early evening timeframe is going to be the worst. That’s when it’s going to be crossing over from Georgia into the Alabama area.”

Thiem said Monday morning through midnight there will be some heavy rains as well.

“Right now we are projecting 3-5 inches of rain over the LaGrange area but that is also possible to increase if we have one of the rain bands over LaGrange for a prolonged period of time,” Thiem said.

UPDATED: Closings for Monday and Tuesday