Power restored for most of LaGrange, Hogansville 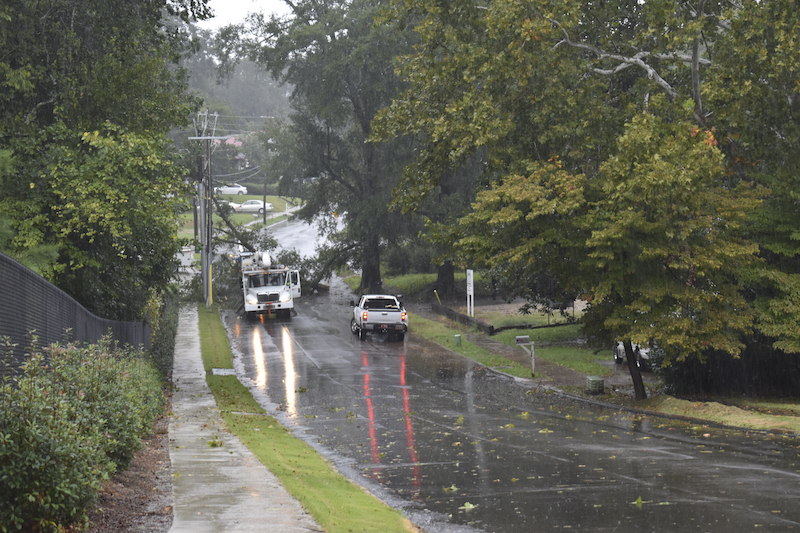 A tree limb fell across power lines at the intersection of Ridley and Bacon Street Monday afternoon, causing power to be out on Greenwood Street, Smith Street and Moody Bridge Road. (Alicia B. Hill | LaGrange Daily News)

Both LaGrange and Hogansville had relatively short periods of power outages when Tropical Storm Irma passed through the region, and officials were quick to credit utility workers for restoring power.

“We are very grateful to the crews — the street crews, the utility crews, the first responders — because they worked through the night dealing with issues all over town,” LaGrange Mayor Jim Thornton said. “I think we are pretty much up and running this morning.”

City utility workers did have to stop work briefly on Monday due to high winds, but as of Tuesday morning, most areas in the city had power.

“I think the biggest thing has been preventative measures that we’ve been taking over the past probably 7 or 8 years or more,” said Patrick Bowie, the utilities director for the City of LaGrange. “We’ve been removing a lot of diseased and damaged trees from the right of way. We’ve been trimming a lot of trees in the right of way and in the vicinity of power lines significantly, and that really pays dividends when we get in a storm situation like we had.”

According to Bowie, the majority of power outages in the last two days were caused by fallen trees, but the damage could have easily been worse without right of way maintenance and tree trimmings.

“I think a lot of credit goes not only to the crews that were out there, but to the planning that was put in place,” Thornton said. “One thing that we benefit from that the city is very proactive on is trimming up trees along power lines, and I think that we benefited from that a lot in this particular storm.”

That preparation could have potentially saved locals from days without power.

“If this had happened, 16 to 20 years ago, we would have had days of outages probably, but Jay Bartlett and the tree crew that work for him, they deserve a lot of credit for the right of way where they trim the trees over the last several years,” Bowie said. “It has really made a difference in the outages that we have seen, and we’ve seen it not just in this storm, but also in a lot of the summer storms that we’ve had that are not hurricane related.”

This was the first major storm during which LaGrange Utilities has been able to use Facebook to update the public on the status of utility repairs, and the page updated regularly throughout the day on Monday regarding the areas that needed work.

Around 3 a.m. Tuesday, power outages were reported on Waverly Way and Hogansville Road, but power was restored to those areas early in the day on Tuesday. Bowie said that the city utility company was primarily fixing minor problems as they occurred during the morning. He asked that citizens wait to report any outages if the entire neighborhood is without power since the utility company will be aware of that outage, but LaGrange Utilities may not be aware of individual homes without power if their input was damaged separate from the neighborhood. If the power in your home does not come back on with your neighborhood, you should contact LaGrange Utilities at 706-883-2000. Information about neighborhood repairs can be found on the City of LaGrange Utility Facebook page.

Hogansville was also able to restore power to most residents by Monday evening, though clean up from fallen limbs and other debris will take time to clear.

“Considering what it could have been, we did very well,” Hogansville Mayor Bill Stankiewicz said. “We’ve had several trees down, but no real damage. One tree did hit a house, but (it) just grazed it.”

The Hogansville Police Department was affected by the power outages, but it was able to continue operating without disruption thanks to generators.

“We got most everybody back online by about 10:30 (Monday),” Stankiewicz said. “Now, there are still isolated individual situations where a tree has knocked out a line to house, and we are working on those individual cases this morning, but the major problem that we had last night is it knocked out 30 to 35 percent of the city, and that all came back online at about 10:30 p.m.”

Hogansville contracts with Diverse Power for repair work on utility lines and receives power through MEAG power, so the city does not have a dedicated utilities director. According to Stankiewicz, Hogansville did not have any flooding as a result of the tropical storm.

LaGrange received a total of 6 inches of rain according to Dan Baker, former editor of the LaGrange Daily News who has been monitoring area weather for more than a decade.