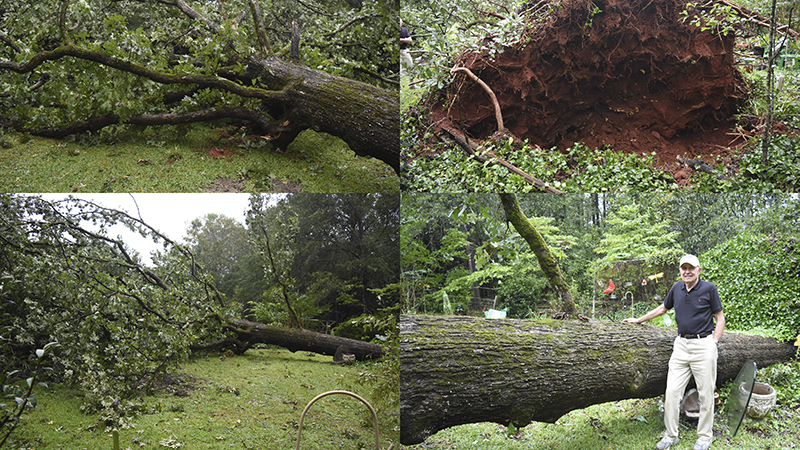 Troup County residents are still cleaning up after Tropical Storm Irma passed through Monday. The majority of the damage from the storm was caused by high winds and fallen trees, but road and power crews worked overnight to clear problem areas.

“We had a couple of people over staying at the house because they were afraid of the storm and the wind. We heard a large bang, and I thought it was a lightning strike that was really close. Then my son came running down stairs and girls came running downstairs freaking out. My son said the tree came down and smashed my daughter’s boyfriends’ truck,” Jameson said. “We went outside and the tree smashed the house, put holes in the roof and the truck got some damage to it.”

Because of the hard rain, Jameson said he was not able to cover the roof until the storm passed later that evening.

He said the house will be structurally OK.

“It was still raining really hard. It leaked into the attic and then down into the garage below for quite a while because our roof is really steep,” he said. “It was very difficult trying to get on there without slipping off. Right before dark, we got up and got it covered, but it took us most of the day to figure out how we were going to do it without rolling off and getting killed.”

The wind also knocked down a LaGrange resident’s 100-year-old post oak tree in his yard. Homeowner Bruce Meredith said the tree must have been over 100-feet-high.

“It was a very nice, strong tree, and I guess a super burst of wind came through here,” Meredith said. “When I moved here 44 years ago, it was the biggest tree in the yard, so I know it’s over 100 years old.”

“We’re in the process of trying to determine how much debris we’ll have as a result of trees that fell in the roads,” Knight said. “We’re still completing damage assessments around the county.”

Along with high winds, the rains also caused an estimated spill of 20,250 gallons of water from the King Arthur Lift Station Monday afternoon. Collection System Manager Steve LaFevor said the spill was caused because a power line fell.

“The lift station at King Arthur lost power due to a tree falling on across the line. The backup generator failed to start, so we had a little issue with the generator not functioning,” LaFevor said. “It allowed the well to get full, and with all of the heavy rains, we were having it just kind of overwhelmed the system.”

LaFevor said the excess spillage went into Pepperell Creek and is majorly consists of rain water.

“It’s going to go to the lake eventually, probably the majority of the spill was rain water, we have some infiltration problems with rain water. Of course, it does have sewage in it as well,” he said. “There shouldn’t be a concern, [it is] such a diluted sample.”

Knight said the County’s Emergency Operations Center, run by the Troup County Fire Department, Troup County Sherriff’s Office and local 911 among other services, only received minor calls and that they responded perfectly to the situation.

“We responded to a number of calls about the high winds and the electrical lines that were affected. All of them were minor,” he said. “I think it was a very coordinated response we had multiple agencies represented at the emergency operation center and everything went very well.”

For flooding or fallen tree branches in public, the City of LaGrange public works department can be reached at (706) 883-2100.

What to expect as Irma passes through LaGrange