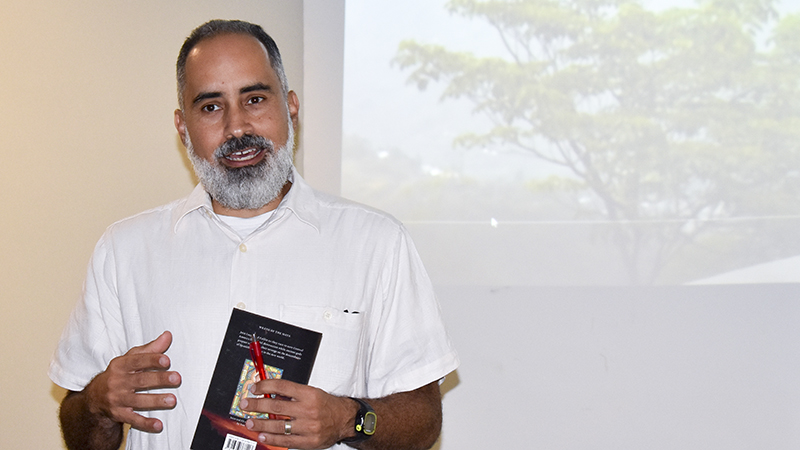 The LaGrange Memorial Library held an opening reception for the ‘Love Crosses Borders’ photo exhibit Thursday evening. The 24 photos displayed were taken of residents from La Libertad, Guatemala in 2016.

Alterna president Anton Flores said the photos have a personal connection to LaGrange because some local residents have roots in La Libertad.

“For almost a decade I have been traveling to the town La Libertad, which is in the highlands of Guatemala, and we have a special relationship between LaGrange and La Libertad that’s often unknown. Almost every family in La Libertad at some point has had someone that has lived and worked here in LaGrange,” Flores said. “In many ways, it’s kind of like an unofficial sister city.”

Flores said he and his wife have traveled to the town often for co-operative projects after meeting a local in LaGrange almost ten years ago.

“Over the years, relationships have deepened, and we’ve also done some co-operative projects where both the local immigrants here and our nonprofit have brought together funds to do a couple of projects such as road improvement,” he said. “We’ve built some habitat houses, we’ve expanded onto their school and started a beekeeping co-operative.”

Photographer Henry Jacobs agreed to travel with Flores because he wanted to learn more about the community. He said he agreed to take photos since he did not speak Spanish and needed a translator.

“[Flores] offered to take me with him on a week-long visit to Guatemala to a community that he’s been going to for many years,” Jacobs said. “I was there with a camera, so we had an idea that he would help me get there in exchange for taking photos that they could use. What came of it was I think more than we expected.”

The opening reception also showed a ten-minute documentary created by Jacobs that featured La Libertad locals talk about what they enjoyed about LaGrange.

“The documentary is just the snapshot [of La Libertad],” Flores said.

Jacobs said the experience of taking photos of La Libertad was enjoyable and a rare opportunity.

“The people of that community are so familiar with [Anton and his wife] that they were very open to having myself there with a camera. I think more photos than we expected came of the trip,” he said. “I really like the photos, and I’m hoping that by having them here at the library now, folks can get a view of the place because not everybody gets a chance to travel to Guatemala with a guide.”

The exhibit opened at the start of Hispanic Heritage Month and will remain on display until Oct. 15.

National Night Out set for Oct. 3