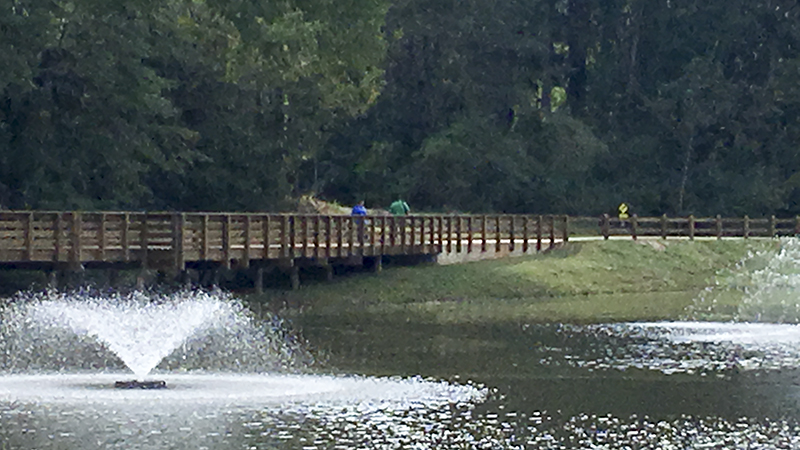 On Monday, the City of LaGrange completed several projects at Granger Park designed to make the area a better place to exercise for years to come.

City workers sanded and repainted the older exercise equipment at the park to match the new equipment and installed a new bicycle rack donated by Golden’s Bicycle Shop at the park. Twenty grass carp were also added to the pond. The projects cost the city under $1,000.

“We wanted to improve the feel and experience at Granger Park,” said City of LaGrange Engineering Project Manager Dion Senn in a press release. “It doesn’t take a lot of money to make a big difference.”

Representatives from the city and the Friends of the Thread both expressed hopes that the updates will serve to improve the park for years to come.

“The equipment was installed when the Olympics were here in 1996, so we were giving it an overhaul instead of tearing it out,” said Natalie Hale, the executive director for the Friends of the Thread. “It is still in good condition, and it still has some years left.”

By sanding off spots where the equipment was beginning to show signs of age and putting on a new protective layer of paint, those years may have been extended.

“I think all the improvements that go along with it make it a nicer, prettier trip, and I also think that if you have something of quality, people in the community buy into it,” said Rick Brock, the owner of Golden’s Bicycle Shop and a member of the Friends of the Thread.

Brock is an avid cyclist and said he hopes that having more places to secure bikes will encourage more people to use bikes to get around.

“I think that if you have a place to park your bike and secure it then you are more likely to ride your bike to whatever business whether it is shopping or sports areas or out to dinner for that matter,” Brock said.

Officials hope that the addition of grass carp to Granger Pond will help prevent algae buildup in the pond. The fish tend to eat rooted vegetation in ponds that can encourage algae growth, and when combined with the recently installed fountains should make it easier for the city to maintain the pond.