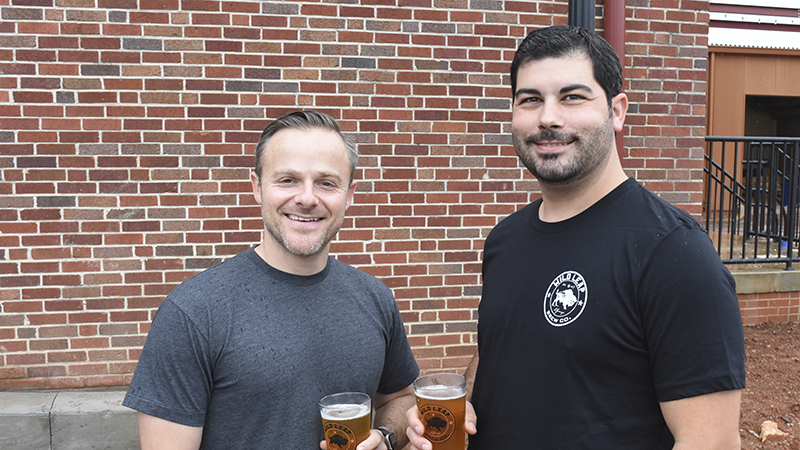 Wild Leap Brew Co. co-founders Rob Goldstein and Anthony Rodriguez pose for a picture at the brewery’s location in LaGrange. The grand opening for Wild Leap will be held Saturday night and tickets are still available. --Daniel Evans

Final preparations are underway for the grand opening of Wild Leap Brew Company on Saturday.

Chief executive officer and co-founder Anthony Rodriguez said the company finished pouring concrete for the stage Wednesday and is putting up tents outside Thursday.

“We’ve got tons of stuff that we’re finishing up,” Rodriguez said. “We got tents for all of our vendors, and we’ve got all sorts of games that we’re getting in. There’s a lot of work going on behind the scenes right now.”

The grand opening on Saturday will feature multiple outdoor games, such as corn hole, Bear Pong and a large-scale version of Jenga, Rodriguez said.

“We’ve got all sorts of games, and we’re also going to have a rock wall as well,” he said.

While the event is ticketed, Rodriguez said there are about 200 tickets left. He said the company is expecting between 1,200 and 1,400 people to attend.

While the brewery is opening to the public on Saturday, Rodriguez said they have been working on it for almost a year.

For the opening itself, Rodriguez said he and his business partner, Rob Goldstein, are excited to finally open their brewery to the public.

“It’s so amazing, we’re so deep in it, we kind of have to take time and sit back and think about it in the few minutes that we have to spare. In the time that I have taken to think about what all of this coming to fruition, I get the goosebumps and the wonderful feeling of getting there,” he said.

People can buy tickets for the event online at wildleap.com/events or through the events tab on the Wild Leap Brew Co. Facebook page.