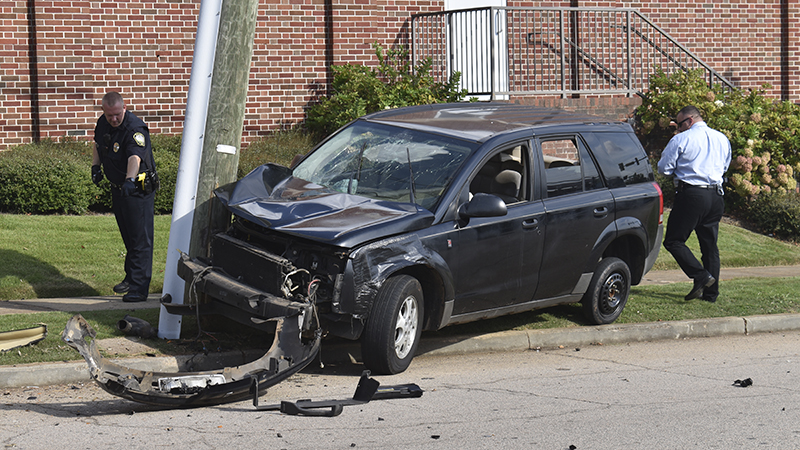 A man was arrested Wednesday after the car he was driving hit a telephone pole on South Lewis Street that knocked out electricity on surrounding blocks around 5:05 p.m.

The man was trying to evade a traffic stop initiated by police because of his improper car tag, LaGrange Police Department detective John Slonaker said.

“Officer Wendy Bryant tried to initiate a traffic stop on South Lewis Street for a tag violation. The rider at that point just sped off from her. She did not pursue at that point, but he just snatched out from the traffic stop and came through the intersection [of Vernon Street and South Lewis], disregarding the red light and actually clipping the front of a vehicle in the process,” Slonaker said. “It appears that caused him to lose control of his vehicle. He was going in a speed of excess and hit the pole.”

After hitting the pole, the man tried fleeing on foot, but was caught in the parking deck of the Courtyard by Marriott Hotel, Slonaker said.  According to officer Bryant, the man was drunk at the time and had carried a book bag with him when he left his vehicle. The police have not located anything inside the bag, she said.

No one was injured in the accident, Bryant said.

The crash caused a power outage across South Lewis Street, part of Broad Street, LaFayette Square and Haralson Street, according to City of LaGrange engineering project manager Dionn Senn. Even the fountain at LaFayette Square went out.

The city utilities workers were able to get the power back on around 6:25 p.m., Senn said.

The president of Splash Kitchens & Baths, Sandy Winslow, said his business’ power went out when he saw the suspect run on Broad Street.

“I was on the phone having a very important conversation when he hit [the pole], and it knocked me entirely off. I was like ‘wow, what just happened,’ and this dude just comes running by five-feet from our office,” Winslow said.

Bull Hibachi worker Xialoing Cao said the business did not know why the power went out in its restaurant after it happened.

“I was taking orders for customers when the power just went off. We had just finished the last table,” Cao said.

“The credit card machine didn’t work, and so we just wrote down their number. We just weren’t allowed to take customers after that.”