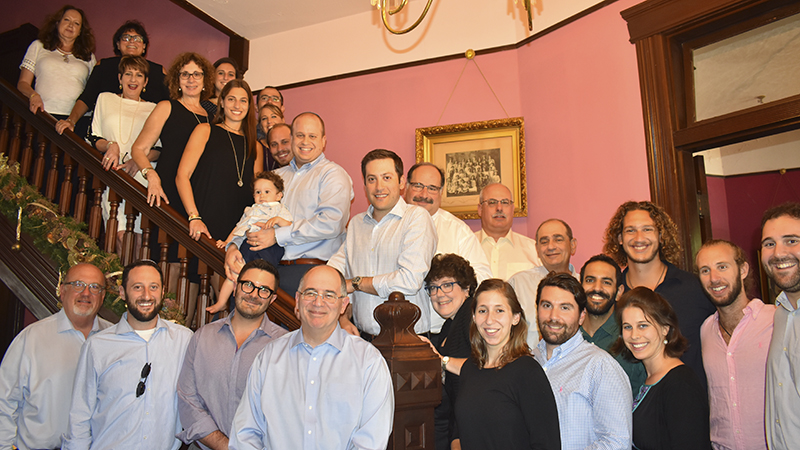 The congregation of Beth El and a group that traveled from Israel pose for a photo Friday as they celebrate Rosh Hashanah. --Gabrielle Jansen

Parishioner Allan Struletz said that while Jewish people had settled in Troup County in the early 1900s, Beth El was formed in 1942.

“[The local Jewish people] used to meet and have their holidays or services in people’s homes. There wasn’t really a synagogue at the time,” Struletz said. “The synagogue is what started 75 years ago, but the congregation was very observant and participated in Jewish traditions.”

Struletz said it was unusual to have a small Jewish synagogue continue for so long in the south. “Even though there are very few Jewish families remaining in LaGrange, we’ve been able to continually have the high holiday services every year of those 75 years, which is very unique in small southern towns,” he said.

In addition to celebrating the holiday, the congregation also has native Israelis celebrate with them every year.

Strueltz said Israelis come every year to work at Camp Ramah Darom and then stay with the congregation through Rosh Hashanah.

Through word of mouth, they bring their friends every year. Thirteen people came to LaGrange this year, Strueltz said.

“The community feels like a family even though we’re not related. It feels so warm,” David said. “We’re bringing stories with us and we hear their stories about LaGrange too.”

Shevy said experiencing the holiday in LaGrange was a unifying experience.

“Just like the Christian holidays, [Rosh Hashanah is] a time to bring people together, and I think that’s unifying and uniting the Jewish people together wherever they are from the world,” Shevy said.