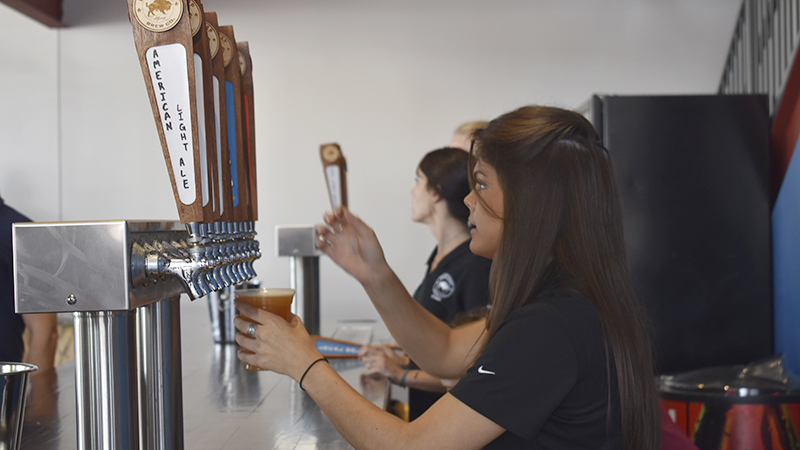 Wild Leap Brew Co. held its grand opening Saturday afternoon. The ticketed event had multiple activities offered inside the microbrewery and in its outdoors space as locals came out to support the brand new business.

The opening also had music as B. J. Wilbanks, Moontower and Coastguard performed on the brewery’s outdoor stage.

Local food vendors were under tents for guests to enjoy with their beers, including Frios, Mighty Joe’s Pizza, Mare Sol and Karvela’s Pizza Company. Inside, microbrewery tours were held hourly between 4 p.m. to 7 p.m. College football games were also shown on television screens.

LaGrange residents Dan and Dianne Davidson said they have been waiting for the brewery to open since they tried some of the company’s beer in Hogansville.

“We’ve been waiting for this for a long time,” Dianne said. “We met one of the owners a long time ago at Karvela’s Pizza when they started to serve the beer there.”

The microbrewery is where the old Westbrook Tire company used to operate. The building has been completely renovated. LaGrange resident Suzanne Ormsby said she was glad the company put the old building to use again.

“I think it’s pretty awesome. Of course, being an associate broker, I’m always interested in real estate, and I saw this building empty for so many years,” Ormsby said. “I’m really happy that we have a brewery open in town we really needed a nice microbrewery in town.”

Former LaGrange resident Zack Britt said the company’s IPA was as good as the ones brewed in Atlanta.

“I live up in Atlanta, and I came down just for this. With all the breweries up there, this one so far is just as good,” Britt said.

Britt said the business’ opening is good for downtown LaGrange.

“Growing up here in LaGrange, this is something that we needed and not having a lot of things around here for my age and older to be able to go and do on Saturday afternoons,” he said. “It’s a pretty cool atmosphere, and it’s fun.”

“For little LaGrange, this is quite an event,” he said.