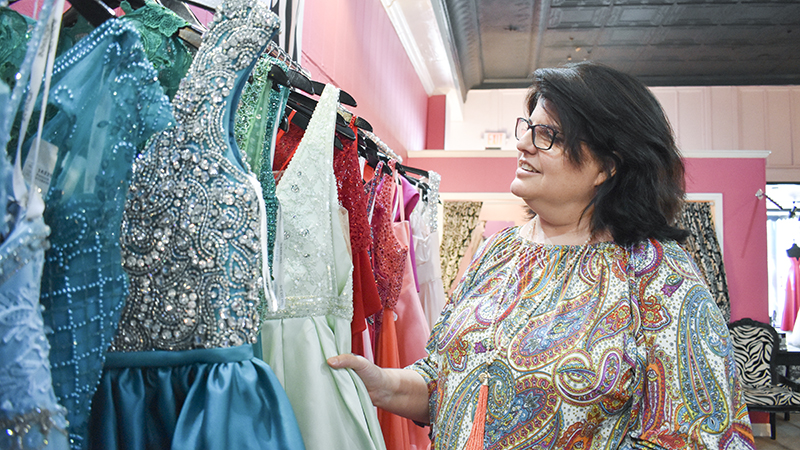 If you think of the 1957 film, An Affair to Remember, every time you pass the bridal boutique of the same name on Lafayette Square, you’re thinking exactly what the store owner, Amy Warren, had intended.

“It’s just a beautiful, sweet movie, and we came up with the idea for that. I remember being with some friends and coming up with names and someone went ‘what about An Affair to Remember’ and I went ‘That’s it. That’s the one,’” Warren said.

The bridal boutique will celebrate its ten-year anniversary next week. Warren said it has been successful because of her employees’ teamwork.

“They’re attentive, hard-working and really in tune to what girls are wanting,” she said. “This is a high service job and so it takes a lot of detail, and they do a great job with that.”

Warren said she had wanted to start the business ever since she moved to LaGrange almost 20 years ago.

“I had always kind of dreamed of it since I got married and went shopping for my bridal gown. I was not living in LaGrange at the time, and when my husband moved here almost 20 years ago there were no formal wears,” she said.

“It’s just something I thought would be awesome to open and there was a need here to do it, so we have enjoyed it.”

Warren said her business gets more fast paced between January and May when brides come through and during the prom season.

“We would love to help all the brides in town and in the area,” she said.

Warren said one of her favorite things about the store is catering to different customer’s styles.

“What’s fun is watching different people’s styles come in because some girls want no bling at all and other girls want to be a princess in big ball gowns. It makes it fun to see where people are coming from in their visions and help them to find it,” she said.

She said she also enjoys having the business be a part of peoples’ weddings.

“That’s what makes the business fun is because most of everybody is happy and in love, and you get to be a part of that special time in their life,” she said. “That’s an honor.”

In addition to mammograms, self-awareness is key to detecting…