Phase two of The Thread underway 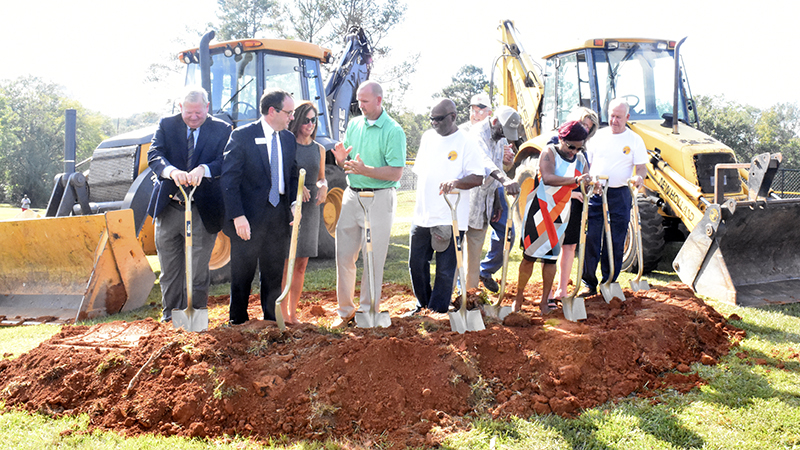 The second part of The Thread project got underway at Calumet Village on Thursday. --Alicia B. Hill

On Wednesday, the partners involved in The Thread project broke ground on the second segment of the trail at Eastside Park in Calumet Village.

The Granger Park segment known as the Model Mile, has already become a popular location for community members to walk, run and even bike, but the Calumet segment hopes to go a step further by tying together sections of the community that are currently difficult to walk between and perhaps even creating a greater sense of community in the process.

“Ultimately, it is connectivity, so it is going to help us with connectivity of our various parks that we have — specifically, here at Eastside Park, Shuford Fields softball complex and then the (George) Harris baseball complex,” said Cajen Rhodes, the director for Troup County Parks and Recreation.

That connectivity will make a big difference in the appearance and ease of use of several parks managed by the Troup County Parks and Recreation department, including Eastside Park, where the ground breaking took place.

“Specifically at this park, we’ve got old sidewalks that run through the park,” Rhodes said. “Those will be removed, and you’ll have the brand new Thread coming through. Along with the park improvements that the recreation department is doing, you have The Thread coming through here making even more improvements. It is going to create an awesome place to come and enjoy recreational activities, so it is really going to help this park out.”

Those improvements are expected to have an immediate impact on the people who live and work near the trail.

“We are so excited,” said Sheri Cody, the executive director at Twin Cedars Youth and Family Services. “The Thread is going to go right behind our property and up the side as well. It will offer opportunities for our kids to interact more with the community where they live, and I think it will be a wonderful way to connect the community.”

This section of the Thread — like the first section and other sections to come — is also expected to encourage locals to make healthier lifestyle choices by providing a safe place to exercise and walk to locations where they can exercise.

“One of the things that we pride ourselves on is our residents having a healthy lifestyle, and that can go from relationships to eating healthy, so The Thread fits in perfectly,” said Zsa Zsa Heard, chief executive officer for the LaGrange Housing Authority. “That we can have something here — we had already started to look at the park and getting it revitalized, so that the families could use it — so it was an awesome idea to actually put The Thread here.”

The LaGrange Housing Authority plans to create a garden with fresh vegetables for disabled children along a section of The Thread. The authority plans to partner with the University of Georgia on the garden project to ensure the area is accessible to children of all ability levels.

City officials also focused heavily on the trail’s ability to connect the community, while reminding locals that the rest of The Thread will depend on residents of Troup County voting in favor of the Special Purpose Local Option Sales Tax in November, which is expected to be the primary funding source for the trail.

“When I think about The Thread, I think about what a piece of thread does,” said LeGree McCamey, a member of the LaGrange City Council who is a board member for the Friends of the Thread. “It sews things together, and this is such a great opportunity and a great occasion. We have a great relationship with public and private (groups) — unity that comes together, and this is our SPLOST dollars at work. That is why it important that we support the SPLOST, so that we can get these 29 miles done very quickly.”

Officials considered the impact of other similar trail systems like the Carrolton Greenbelt and Atlanta Beltline while developing the plan for the Thread and hope to see similar development of commercial properties and community interaction along LaGrange’s trail system.

“It is an amenity that will sew the community together,” McCamey said. “It will bring us together because everybody can walk or you can ride a bike or you may be able to be pushed in a wheelchair, whatever, but it can be done on The Thread. Hopefully one day you will see these entities such as grocery stores, banks, pharmaceuticals where you can do your business as you come out of your house and you can walk to the various places and go back home, but the main thing is you can go out, and you can exercise, and you can be healthy.”

The Calumet segment of The Thread will be the last part of the trail covered under SPLOST IV funding that was earmarked for the general categories of amenities and sidewalks. If SPLOST V is passed in November, the combined city and county funds should cover roughly 10 additional miles of the Thread.

“I think it is going to be money well spent, but I also want to encourage all of you to recognize that the next 10 miles or more of The Thread will only be made possible if we are successful in passing the SPLOST referendum which is coming up on the Nov. 7 ballot.”

Both the City of LaGrange and Troup County have allocated $5 million apiece out of the SPLOST V plan for The Thread project.

The second segment of the Thread is expected to be completed by the end of the year.