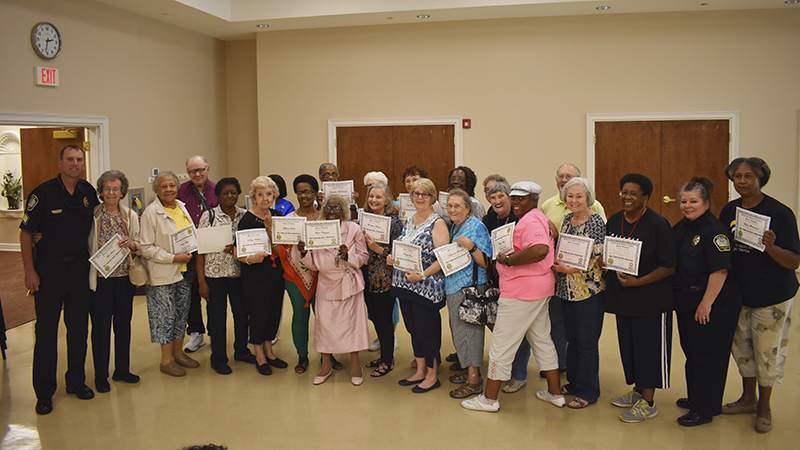 The Senior Citizens Police Academy held its graduation on Thursday at the Active Life Center. The class was eight weeks long and is specifically organized for seniors. --Gabrielle Jansen

The one hour sessions held every Thursday were taught by officers from the LaGrange Police Department.

The class had a K-9 session led by Cpl. Clayton Bryant and Rik, his dog partner, about why the LPD uses dogs in their investigations.

Sgt. Marshall McCoy and Officer Natalie Blackstock then gave closing remarks and handed out certificates to participants. McCoy said the police department puts on the academy to show citizens how law enforcement operates.

Unlike the 10-week citizens police academy, this program is specifically organized for seniors, Blackstock said.

“Some of the things that affect regular citizens affect them harder because they’re just a more vulnerable type age bracket,” Blackstock said. “So, our topics are geared more toward what they need and what is affective in their life.”

Topics the academy went over included internet safety and elder abuse. They also toured the police department and 911 call center, she said.

“We had a presentation on elder abuse, how to recognize it and how to report it. Education helps,” she said. “Most of them had never seen 911 so they had no idea what that was all about.”

Blackstock said this was the first time in  several years that the LPD put on the program.

Participant Ruby Parker said this was the second time she has participated at the academy. She said she enjoyed learning about how to recognize elder abuse.

“I don’t have that problem, but I have seen some people that do, so I think that was more informative,” Parker said.

“I really enjoyed that.”

Parker said she would recommend the program to other senior citizens.