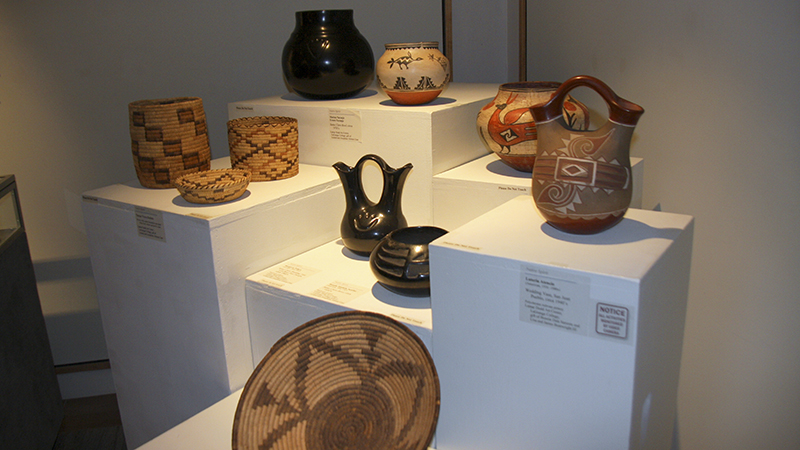 A variety of Native American art objects are currently on display at the Lamar Dodd Art Center. (Submitted)

LaGrange College closed out September with the grand opening of two collections of Native American art at the Lamar Dodd Art Center.

The exhibit features pieces from the Case and Sansom collections which represent decades of dedicated scholarship on Native American culture and provide a window into the world of groups ranging from the Navajo to the Sioux. The exhibition features more than 200 art objects from the early 20th century such as basketry, rugs, ceremonial mats, jewelry, pottery and paintings.

“(Bonnie Dale Sansom) had been collecting all these things, and it was her wish that they stay together and that they be displayed at a museum somewhere,” said Lisa Boatwright, who along with her husband, donated her aunt Bonnie Sansom’s collection to the college. “We were fortunate enough that LaGrange College was interested in us donating the collection. It is really perfect because they have another collection that they (were able to) put together to make a really nice display.”

According to a press release from LaGrange College, Sansom taught at a Michigan boarding school for Chippewa children for some time. She focused on the nutritional needs of displaced Native American children by managing and preparing nutritious meals for large groups. She also spent 10 years teaching at a vocational school in Riverside California where her students were primarily Navajo.

“She purchased things, but she also was friends with people who gave her things,” Boatwright said. “Parents of kids (she taught) would give her things, and that is how she started collecting.”

Sansom’s collection includes a variety of pieces that she purchased or received as gifts from students. She also traveled extensively and gave presentations about her hobby during her lifetime.

The Case collection came to LaGrange College through Leland and Josephine Case, who donated their collection in addition to Josephine’s research to the college.

“It is an incredible collection of works from the Pueblo, Navajo, Hopi and Sioux,” said John Lawrence, Fuller E. Callaway Professor of Art and Design.

According to a press release from LaGrange College, Josephine Case spent a year living with a South Dakota Sioux tribe, studying music, dance and art. The tribe reportedly adopted her and gave her the name Yellow Singing Bird. She traveled around the country, doing lectures and performances about the Plains Indians.

Because the Plains Indians tended to be nomadic, everything that they made, even the art, needed to be easy to transport and the pieces generally served a practical as well as artistic purpose.

“Most of their art was made on things they could travel with like pottery, robes, moccasins, baskets, leather goods and jewelry,” Lawrence said.

Several other exhibits are also currently on display at the Lamar Dodd Art Center, including a series of paintings and photographs of the west by Tim Taunton, professor emeritus ceramics and sculpture at LaGrange College.

“I don’t think a lot of people knew that Tim was a painter,” Lawrence said. “Tim spends his summers in Colorado and has always loved hiking in the canyons and mountains of the Southwest, especially to the ancient sites of the Anasazi Indians. His paintings deal with the mythic beauty of place with a photographic precision.”

Other exhibitions currently on display include “Southern Icons A to Z: Writers Respond to Photographs,” “Once Was Lost: Photographs by Richard Johnson” and “Toward Abstraction: Lamar Dodd Selections from the Permanent Collection.”

The gallery is open 8:30 a.m. until 4:30 p.m. weekdays when school is in session. For more information, contact Lanora Yates at lyates@lagrange.com