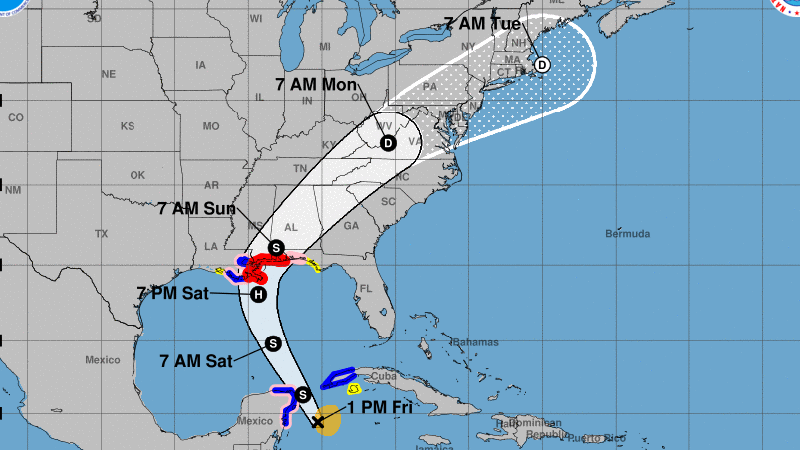 Tropical Storm Nate is projected to hit the Gulf Coast of the United States on Saturday. --National Hurricane Center

LaGrange is expected to receive some impact, though the storm projects to be much weaker by the time it reaches this area.  According to Kyle Thiem, meteorologist with the National Weather Service in Peachtree City, the worst of the weather is expected to hit in LaGrange Sunday evening. LaGrange could receive anywhere from 1-3 inches of rain and 30 miles-per-hour winds.

“Going into later Saturday night into Sunday afternoon, it is possible we could see a few isolated tornados as well associated with the rain bands,” Thiem said.

The storm has prompted hurricane warnings along the Gulf Coast all the way from Louisiana to parts of the Florida panhandle.

“It looks like Monday we could be dealing with residual rainfall, but the system itself should be out of here starting around Sunday night starting in the LaGrange area,” he said. “It should check out Sunday overnight.”

Because of the tropical cyclones passing, the expected rain and winds could cause hazardous conditions, he said.

“It’ll be a somewhat substantial [storm], anytime we get a tropical storm in our area, it can do some damage. Most of it’s going to stay up to the north as far as rainfall, but we could still several inches fall over the course of six to twelve hours. It can cause some hazards, the winds speeds aren’t going to help,” he said. “We’re likely to see quite a few trees down in the area, quite possibly a few power outages because of that as well.”

“It probably won’t be extremely nice in the Florida and Georgia panhandle regions, but we’re going to have to deal with the tropical cyclone whether you’re in LaGrange or the Florida panhandle somewhere,” he said.