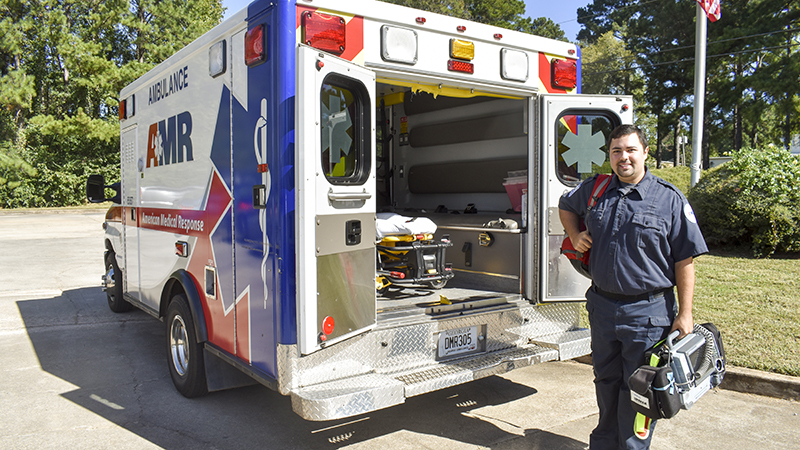 Brandon Adams, who works as a field training officer for Troup County American Medical Response ambulance service, poses for a picture beside an ambulance.--Gabrielle Jansen

“I’ve always, ever since I was little, enjoyed helping people in all capacities and also I like working with the public and meeting new people every day and helping them through crisis,” Adams said. “I figured there was no better way to do that than work in public safety or EMS.”

After graduating from Callaway High School, Adams worked for a year as a scout at a modeling agency. When he came back, he joined the police force before deciding to go into EMS. Outside of working as a paramedic, Adams sometimes works for the Troup County Sheriff’s Office.

“I still work as a police officer with the Troup County Sheriff’s Department as a reserved deputy,” he said.

As a paramedic, Adams said part of the job is working with the local fire departments in medical emergencies, such as answering calls when people have stopped breathing.

“We would respond with Troup County Fire or LaGrange Fire and we would start compressions and do everything that the emergency room can do in a prehospital setting,” he said. “We would give them defibrillation therapy if they needed it or give them drugs that can restart their heart and, of course, we would perform [cardiopulmonary resuscitation] and we would place an advanced airway if they needed it.”

Adams said that while one of the challenges of working with the local AMR is the stress, one of the better things is how close he is with other first responders.

“A lot of us, whether it’s in AMR or at the fire services or in law enforcement, a lot of us are from here originally and we know each other, and we know each other’s kids. It’s one big family,” he said. “One of my favorite things about my coworkers is how we can all make each other laugh because this is obviously a very stressful job.”

It’s easy to get upset because of the crisis’ people experience, he said. When fellow paramedics try to lighten the mood, everyone picks up on it, Adams said.

“After a critical event or a very stressful or a very emotional call, we’re able to be a support system for each other and make each other laugh. We pick on each other. We’re like a family,” he said.

“I just like the overall vibe with my coworkers. We know when something is wrong with each other, and so we’re able to intervene or help each other through it.”

Adams said one of his favorite things about his job is seeing how close the community is and helping people through emergencies.

“My favorite [part of the job is] meeting new people, seeing people that I know and have known throughout all their life and helping them through the crisis, and in some instances, being a familiar face to my patients,” he said.

Adams especially enjoys when patients follow up with him after they receive care at hospitals. He recently received a phone call from a man who thanked him after Adams had him airlifted from an accident.

“I put him on the helicopter, and he goes and I don’t know what the end result is,” he said.

Away from work, Adams said his three-year-old son, Oliver, keeps him grounded.

“He’s my mini-me and he’s just, three-years-old. They start to develop that personality, so he’s like my little best friend. We go and do all kinds of stuff together,” he said.