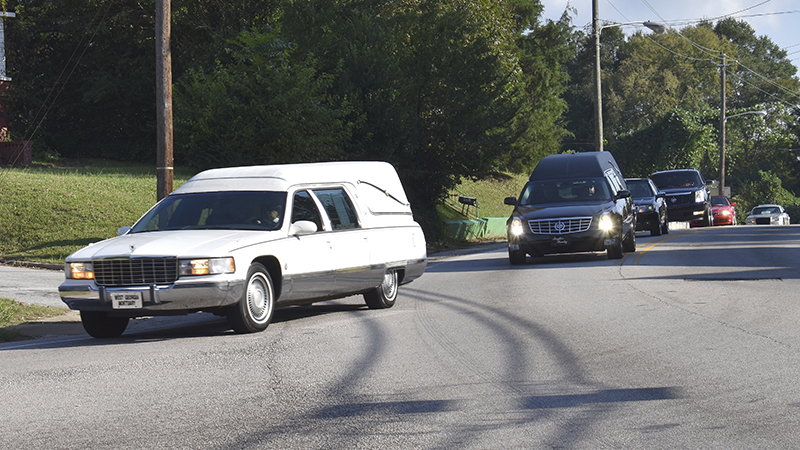 Above, a mock funeral procession travels down Union Street Thursday. The mock funeral was held to raise awareness about violence in the community. --Gabrielle Jansen

The Stop the Violence demonstration was held on Union Street Wednesday evening, and organizers hope it will help bring awareness to violence in LaGrange. The demonstration, which started with a funeral procession that began at Sweetland Amphitheatre included the LaGrange Police Department and local funeral homes Lakes Dunson-Robertson, West Georgia Mortuary and Striffler-Hamby Mortuary.

Event organizer Kimberly Dixon said she started the event with Travis Hart and Kevin Patrick to raise awareness of all the violence that has happened recently in LaGrange, including gang and domestic violence. She said when she was a student at Columbus State University, the college did a similar procession to raise awareness to drunk driving by bringing a casket to campus.

“We just wanted to do a procession to open people’s eyes because when you see a funeral pass by, you’re supposed to stop and respect it,” Dixon said.

District 2 City Council Member W. T. Edmondson and LaGrange Police Chief Lou Dekmar spoke at the demonstration. Edmonson, owner of Lakes Dunson Robertson Funeral Home, spoke for all funeral home directors by saying they are tired of having to bury young adults who were victims of violent crimes.

“We’re tired of having to bury mothers’ children who have been brutally murdered or killed in some kind of way because we’re the ones that have to deal with the hurting parents — hurting fathers, hurting mothers, hurting grandparents, aunts and uncles,” Edmondson said. “We have to deal with that, and if you can look at any of these funeral directors from these funeral homes, they can tell you it is not a fun thing to do.”

Edmondson said the funeral homes want the community to know that life is important.

“All lives matter to me, so when you have someone affected, it not only affects the family, but it affects us as well,” he said. “We want the streets of LaGrange to be safe while our senior citizens can sit on their porches and our children can play in the streets. We want all of that to happen, so we can have a great little city.”

Dekmar said that violent crime has gone down since he started working in LaGrange, and he credited the decline to partnerships in the community.

“When I came to LaGrange 23 years ago, our violent crime was twice what it is today. So, working together and addressing those public safety issues in those neighborhoods with partnerships has worked, but any kind of violent crime is too much. This year so far, we’ve had two gang-related shootings. Three years ago, we had almost 30,” Dekmar said. “Government can’t be effective without the community. Public safety cannot occur unless there’s a partnership between the community and the police.”

Dekmar said there are currently 50,000 people in prison in Georgia and that 70 percent of those incarcerated were involved in a crime that concerned alcohol or drugs.

He said the department is working to educate students about drugs and alcohol to prevent further crime in the city.

Dekmar said violence and crime can stop if enough people in the community work together.

Dixon said there has to be better ways in the community to stop violent crimes from happening.

“There’s a different way to go, you don’t have to resort to violence in every situation. We need to do something about it. It’s not enough just to be on Facebook posting statuses about it,” she said. “We have to do something as a community, so the only way I see we can do that is work with our city officials.”

She said in an email that she hopes those who saw the procession and the signs on the vehicles that said ‘Stop the Violence’ and ‘End Domestic Violence’ may affect those experiencing violence positively.