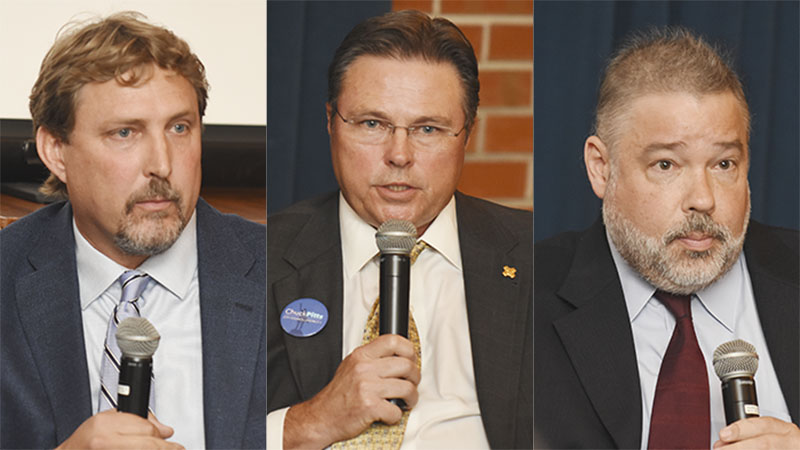 The three candidates for spot 1B on the LaGrange City Council participated in a forum Thursday night at Del’avant as each looked to gain momentum heading into Nov. 7’s election.

Jim Arrington, Luther Jones and Chuck Pitts were asked about job growth, adding diversified housing and working with the other cities in the county to ensure mutual prosperity. The forum was hosted by the LaGrange-Troup County Chamber of Commerce, the Troup County Republican Party and the Troup County Democratic Party.

Mayoral candidates Jim Thornton and Jimmy McCamey also participated in the forum. A story published in Friday’s LaGrange Daily News about that portion of the forum.

Here’s a look at what each council candidate had to say Thursday, divided by topic:

The candidates were asked about the city of LaGrange’s job growth, which may make it a challenge for employers to find qualified candidates. The question referenced an estimated growth of 6,000 new jobs in the next five years.

Jones said THINC Academy is one of the keys to filling those jobs with qualified candidates.

“When those employers or those plants come to town, make sure we work with them to work with THINC Academy to train our workforce that wants to work in those types of jobs … so they can train them up and get them ready for work.”

Pitts agreed that THINC Academy and Circles of Troup County are the key to fixing this problem. He said 30 percent of THINC focuses on “soft skills,” which are often the intangibles that get someone a job.

“Soft skills help people understand why it is important to show up to work on time and to look people on the eye, and to pay attention to the initial training,” Pitts said. “If you live in a poverty situation and are trying to move to another level, your level regarding those soft skills is sometimes woefully behind.”

Arrington said with all of the cities around there are many qualified workers who are willing to make the drive to LaGrange. He said the key to helping LaGrange citizens qualify for those jobs is to put an emphasis on trade positions in the schools.

“I do believe we have got to start in our school systems with the trades again. I think we pushed that out to the side and said we need everybody to go to college,” Arrington said. “Back twenty years ago, that’s what we kept pushing, pushing, pushing and now I think we’re seeing we possibly made mistakes. Maybe everybody doesn’t need to go to college, and I think that’s what the THINC Academy is all about, and I think it’s awesome.”

Each three candidates were asked about how they would help provide more affordable housing options in the city of LaGrange.

“Unless we take in more land, we are going to have to look at trying to come up with affordable housing and housing that is in the mid-section,” Arrington said. “We’ve got low-income and high-income housing, but I do believe we need to take a very close look at where we can develop and how we are going to develop.”

Jones said the city should have planning meetings, have community input and look into which areas need the housing.

“See what needs there, see how we can help and see through the economic development section and see if we can recruit builders and investors to build that type of housing,” Jones said.

Pitts said the challenge is to get people to take pride and ownership in the area they live in, which creates a positive ripple effect. He credited Dr. Robert Tucker with Georgia Initiative for Community Housing and Ricky Wolfe with DASH for making progress in this area.

“My friend says he can’t build $175,000 houses any faster than they can be built because that’s the hot item. That’s wonderful because the people that can afford that have a middle-income job,” Pitts said.

Working with county, other cities

The candidates were asked how they would work with Hogansville, West Point and Troup County as a whole to ensure everyone succeeded.

Jones said it again goes back to education, which helps people get jobs.

“We’ve got to educate everybody who wants to be educated to get into those jobs because if you get jobs, you have a lower unemployment rate like the mayor was talking about,” Jones said. “LaGrange prospers, Troup County prospers and instead of pulling people from Auburn and Newnan to work in our factories, we can pull them from right here in Troup County.”

Pitts said he’d brainstorm with the other cities, as he has with other dental practices from other communities.

“I think spending time with other people from other areas is a great way to get new ideas,” Pitts said.

Arrington said he didn’t have a specific example, but that he can and does work with everyone. He noted relationships with council members in West Point and with the Troup County Board of Commissioners.

“I believe that’s how we are going to come up with ways to make Troup County better, which is to work together with those guys,” Arrington said.

“It is evident that can do a better job of working with the county and the cities. That’s the start I would suggest.”

Weekend Ticket: Leggin’ it for Literacy leads off busy…