Passion for riding is key to Golden’s Bike Shop 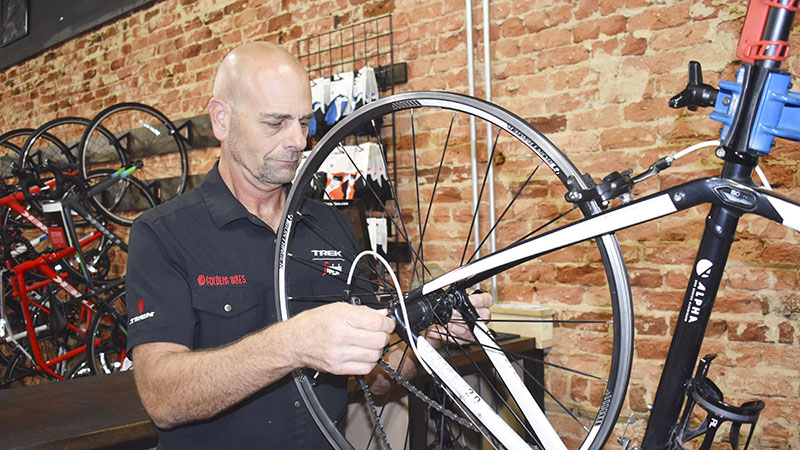 For Golden’s Bike Shop owner Rick Brock, selling bicycles is just a part of the job. Cycling with the community in weekly shop rides is what his store is about.

“[My] goal is not to sell bikes, I’m about getting people riding them. I tell people I’m the worst bike salesman ever because I don’t care where they buy their bike, as long as they ride it,” Brock said. “I have customers that come here that didn’t buy their bike here, but they come in and I service it for them and we do shop rides together.”

While the store had originally been run by Bill Golden for about 20 years, Brock said he only bought it around a year and a half ago.

“I purchased it from two fellas who had bought it from Bill Golden. Basically, my partners and I came to an agreement to purchase their shares,” he said. “I kept the name, I believe it has a lot of neighborhood recognition.”

Originally from Fort Myers, Florida, Brock became interested in bicycling after repairing and restoring a bike and riding it to work every day. He said after repairing another one for his wife, Diana, they decided to ride their bikes home together when he got out from work, and he then became hooked.

“About 16 years ago, I was walking down the street one day and found a bike in a trash. I picked it up, I took it home, cleaned it up, put new cables on it, got it all back riding, and I started riding it to work,” he said. “One day she looked at me and said ‘honey, do we have to ride straight home?’ That basically began a love affair with cycling with her and I together.”

Brock and his wife to moved to LaGrange in November 2005 where they had some friends.

“Everything kept bringing us back to LaGrange,” he said.

Along with running the shop, Brock holds weekly rides on Saturdays for cyclists at all skill levels.

“We run a regular shop ride out of here every Saturday morning,” he said. “It’s open to everybody who wants to come ride. We do two routes. One is a bit more aggressive than the other.”

Brock said that shop rides have been going on for about three years, and when they started about four or five riders would come. Now, he said the group has expanded to about 12 to 14 riders every week.

The bike shop also has monthly rides for beginners and monthly trail rides, he said.

This coming week, the shop will sponsor and work as support when the Bike MS: Atlanta Peach Ride starts in LaGrange.

Brock said one of his favorite things about cycling is taking in the scenery around him.

“[My friend Bill and I] were riding Sunday afternoon, we went through Lanett, and we went by this old church and people were waving. Bill said ‘You know? If we were driving in a car, we probably wouldn’t have seen that.’ There are so many wonders in our country and in our world that you can see on bikes, that you will never see in a car,” Brock said.

Brock said those interested in joining the weekly shop rides can visit the shop’s Facebook page or go to goldensbikes.com.