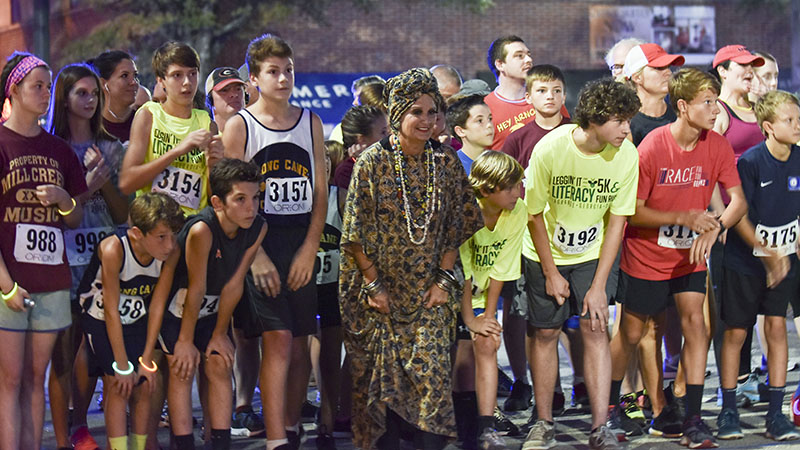 About 143 runners took off on downtown streets in LaGrange Saturday night for the annual Leggin’ it for Literacy 5k and Fun Run.

The funds from the evening race benefits the Troup County Certified Literacy Program’s projects, according to its director, Debbie Burdette.

The outdoor event held activities for all ages including a Zumba workout before starting the race, streaming college football games and giving away free popcorn. There was also a short run for toddlers and a one-mile race for younger children.

Mama Jama, who is portrayed by Burdette, also made an appearance and started both the one-mile and 5k with the runners.

Runners were given a free Country’s Barbecue sandwich and a glass of sweet tea after they finished the race.

Burdette said the yearly event is held at night to stand out from other local 5k runs.

“We didn’t start (the race) out at night, but (decided) just to shake things up and make it a little different because once we started with it, everybody started doing a 5k,” Burdette said. “We thought that we would do it at night to make it a little different. And it’s modeled sort of after the [Midnight Express 5k] in Columbus. They do a midnight run, we started out at 10:30 p.m., then 9:30 p.m. and now it’s 7:30 p.m. We’re all good, we all get to go to bed early.”

“It feels good because it’s after the sun goes down, it’s a little bit cooler, you feel like you can move a little bit faster, you don’t have the heat exhaust in you,” Reagan said.

Runner Chuck Hardy said this race was special to him because it was his first 5k when he started running five years ago.

“This was the first race that I ever ran five years ago, so I feel kind of obligated to keep doing it,” Hardy said. “It’s just really hilly, but it’s a lot of fun. It really does have a small town feel to it.”

Tonya Ammons, coach for the Heard County Middle School Cross Country team, said she enjoys the event so much she still travels from Franklin to compete.

Ammons said she brought students to the event so they could get experience of running five-kilometer races.

Reagan said helping promote literacy through the evet was a great cause.

Burdette said she was grateful for all who attended.

“I just thank everyone for coming out and supporting literacy and making education the buzz word,” she said.

Passion for riding is key to Golden’s Bike Shop