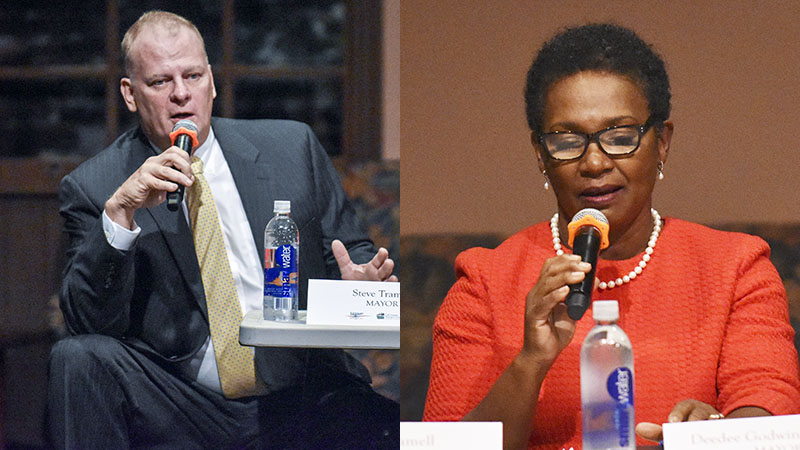 Candidates running for mayor and city council positions in West Point had their voices heard Monday at the forum at New Horizon Theatre.

At the forum Mayor Pro Tem Steve Tramell and Deedee Williams faced off about developing downtown, race relations and SPLOST. The two were reminded early on that they were participating in a forum and not a debate. Tracy Bandy, Joe Downs, Henry Hutchinson, Gloria Marshall and John Morrison also spoke as they campaigned for the three spots available on the city council. For more on the city council forum, see Wednesday’s edition of the Daily News.

Here’s a look at the mayoral discussion, divided by the topics discussed:

Tramell said he is for business diversification in town, but will take on any business that wants to open even if it’s in the same industry.

“The main thing we have to do is concentrate on getting more businesses. I hear a lot about diversifying in our community,” Tramell said. “We have to diversify because we were in the same boat with the textile industry 10 to 15 years ago, and they left our city and we can’t be in that same boat again.”

Williams agreed that diversification was necessary for town.

“We have to be proactively pursuing diversification. We know what it’s like to have all of our eggs in one basket,” Williams said.

Williams said to have big business come to town, the population must grow, so the city needs to concentrate on keeping residents through education and housing.

“We have to create amenities to attract people and that includes many things to start with,” Williams said. “You have to have the people in order to attract those business. Target is not going to come to West Point, Georgia for 3,500 people. We have to be ready to seize the opportunity of the growth we are expected to have between now and 2025.”

Tramell said the city is close to getting fast food restaurants and chain stores, and that once they come, it will be like a domino effect. He also defended the city’s size, saying it doesn’t put West Point at a disadvantage.

“One of the first things I started doing when I began to attend meetings with developers and with our economic development people here in town was tell everybody ‘we’ve got to stop talking about this as community of 3,500 people.’ We have to look in an eight, 10 or 12-mile radius of here and we promote ourselves. We’ve got close to 30,000 people in that 12-mile radius and that’s what these people — when they’re looking for fast food or grocery stores — they’ll be looking and not just what we have in West Point,” he said. “Those businesses are on the verge of coming.”

Payments in Lieu of Taxes

Williams supports the PILOTs programs, which provides tax incentives for recruiting business, but said that businesses need to be held accountable.

“Don’t continue to abate taxes, hold business accountable for paying their fair share at some point,” she said.

Tramell contrasted Williams by saying the city needs to be competitive to bring in new companies.

“We have to compete with these other counties if we want these suppliers located here,” he said.

Both candidates own multiple properties in the city. Williams said she does not own a lot of land, but that her opponent owns too much to run the city.

“Property that I own in the city of West Point is very insignificant in comparison to the properties that are owned by my opponent, owning properties in the downtown area. Steve can tell you how much of downtown he owns. It’s very significant,” she said.

Tramell defended himself saying his ventures in town are not influencing his power with the city council.

“I’m not going to make apologies for what I’m doing because I care very much about West Point. I’m invested in West Point and I care about West Point’s success, so I will never apologize for that,” he said.

The candidates were asked about the Racial Trustbuilding Initiative funded by the city and the condition of race relations. Tramell said race relations always need more work, but that the city is very friendly to all of its citizens.

“Through my lens, it’s not good. Perspective is everything,” she said. “I think as long as you stay in your place, don’t dare run for mayor.”

Williams said she supports SPLOST and accountability with the money.

“It gives us opportunities to have things we would otherwise not be able to have afforded. The one cent (extra tax), we don’t miss it. We have to do what we say. We have to live up to what we promise.

Tramell said he also supports the extra tax fund and wants to advocate for more shares from the taxes for West Point.

“We’re not getting a fair share from Troup County. We do deserve more. All the pennies that you are all giving up is going to be worth $5 million that we’re going to get from the SPLOST,” he said.

Rosemont Elementary being treated for mold