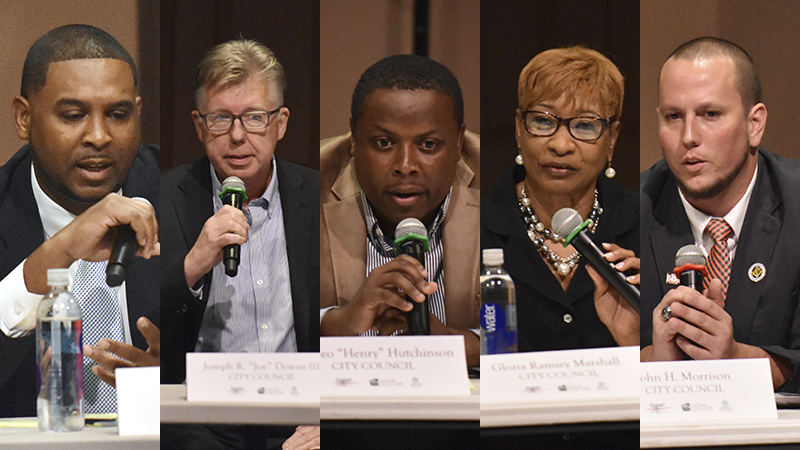 Council members Gloria Marshall and Joe Downs and challengers Tracy Bandy, Henry Hutchinson and John Morrison spoke about local issues. Some of the topics discussed included reducing the crime rate, growing West Point and the affordability of the city.

Here’s a look at what they had to say about three of the topics discussed during Monday night’s forum:

Bandy, who has a background in law enforcement, said crime is not that high in West Point. He said the police department should hire more locals and become more community oriented.

“[We should] hire local people, retain them and make people feel like they care for them,” Bandy said.

Downs said local law enforcement is policing certain areas of the city, including adding extra security cameras in the local housing authority. He said he believes crime comes from Atlanta and Montgomery, Alabama, but the city is still a safe place.

Hutchinson agreed with Downs that West Point is a safe community, but said that gangs aren’t coming from Atlanta and Montgomery. He said the city should promote neighborhood watches.

“Overall, I think this [place] is a safe community. I think to address the issues we continue to promote community policing with the neighborhood watch programs,” Hutchinson said. “Also, we need to address our citizen problem. A lot of young youth are going to jail. They haven’t come home.”

Marshall said she also thinks the community is safe and that crimes seem big because West Point is a small town.

“I do think that West Point is a safe community. We have had some crime over the last year. We haven’t had a lot, but we have had some,” Marshall said. “We are a small town, and it seems like when we have a problem, it seems like more than a problem because we are small, and it’s put out differently than it would if it was in a bigger town.”

Morrison said that while the community is safe, West Point can prevent crime by getting youth involved with different activities.

“I think there’s a two-part process there’s a short-term, and I think there’s a long-term. The short-term is enhancing to continue to support our police officers, bringing in the right people and working with different communities to find the answers to some of these problems and the rest of the issues,” Morrison said. “For a long-term solution, I believe it’s very important to start the education process and the early childhood education and other investments in our youth. Just giving our time to the children of this community will help them to grow up to become productive members of our society.”

Marshall said the council should concentrate on affordable housing and adding fast food chains through town.

“We do have some affordable houses coming soon and hopefully that will attract more people to West Point because it will give them a place to live,” Marshall said. “The other thing is that younger people are looking for things to do. There is a lot to do in West Point, there’s a lot to do downtown, but sometimes when you get off of work you want to drive through somewhere and pick up a meal instead of go sit down.”

Morrison agreed with the other candidates and said to diversify businesses downtown and add housing.

“Having industries — retail, fast food, things of that nature, some sort of entertainment sources here that we can all enjoy,” Morrison said. “We’ve been moving in the right direction, and as [Mayor Pro Tem Steve Tramell] has mentioned a few times, there are a lot of things in the works.”

“I think the city needs to do a better job of promoting themselves. I think they need to hire somebody who will get out there and promote them,” Bandy said.

Marshall said the council has partnered with Dependable Affordable Sustainable Housing to make housing affordable. She also argued that affordable is a vague term.

“Affordable is based on your income, if we’re going to do affordable housing, it should be based on income,” she said. “Everybody can’t afford a $500 or $600 house payment, and [the council] is aware of that.”

Morrison agreed with Marshall about affordability being income-based and said the city needs a diversity of housing.

“You need to have all spectrums covered in a feasible manner. It’s not going to be something that happens overnight,” he said.

Hutchinson said affordability is dependent on living expenses, and while he supports affordable housing, he would like to see mixed income housing areas.

“When we talk about affordable housing and low-income housing, to me, it’s still segregation in some way because you put certain people who make a certain amount of money in a certain area,” Hutchinson said.

“I think it will be important for the city to lower utility rates so lower [income] people can afford to pay those utilities after they get in their own homes,” Bandy said.

Downs said affordability is not only about residents of West Point, but also for the council when trying to build these residences.

Early voting began in West Point on Monday and will continue through Nov. 3. Polls will be open Nov. 7 from 7 a.m. to 7 p.m.