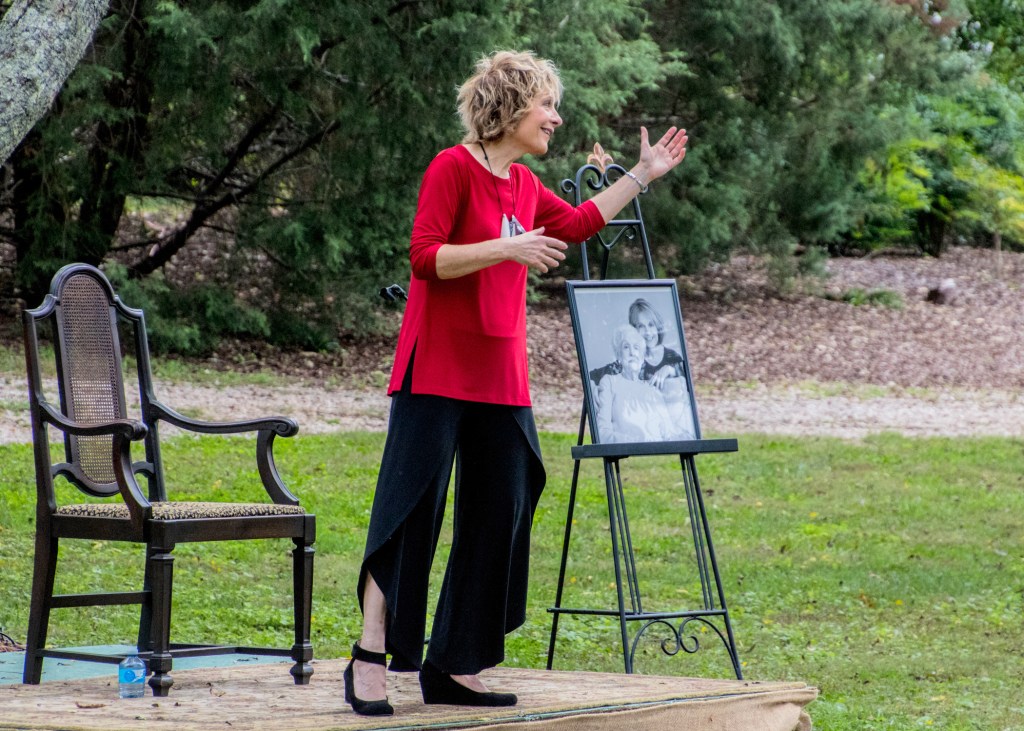 Hills & Dales Estate hosted the sixth annual Stories in the Garden Sunday, Oct. 15 featuring Dolores Hydock, storyteller and actress from Birmingham.  The free storytelling event was co-sponsored by the Azalea Storytelling Festival who announced that Hydock will return in March 2018 for its 22nd festival.  Hydock has been a featured storyteller at the National Storytelling Festival in Jonesboro, Tennessee as well as festivals and venues all across the United States.

For Sunday’s event, Hydock presented “In Her Own Fashion,” a story performance based on a series of weekly interviews she conducted with Ninette Griffith, the Fashion Coordinator for Loveman’s Department Store in Birmingham in the 1950s and 1960s. According to Hydock, “Ninette’s story goes far beyond her career.  Born in 1913, she was witness to the 20th century in the South, so her stories span the lively times of the 1920s, the dark days of the Depression, the war years of the 40s and 50s, and the social upheavals of the 60s.”

Hydock interviewed Griffith over the course of 18 months, amassing over 50 hours of recorded interviews which included tales of an eyebrow raising love affair, hilarious blunders at home and work, and the triumph of humor and spirit over mistakes, pride, disappointment and loss.  Sensing that Ninette’s amazing stories needed a wider audience, Hydock condensed the interviews into a one-woman show that was first produced at the Terrific New Theatre in Birmingham.

“This elegantly independent woman lived a life that followed no one else’s pattern,” Hydock said.

Hills & Dales and the Azalea Storytelling Festival, in conjunction with their sponsoring organization, the LaFayette Society for Performing Arts, will once again team up for Stories in the Garden next October with nationally known storyteller Tim Lowry returning to LaGrange after his debut appearance at the 2017 Azalea Festival.