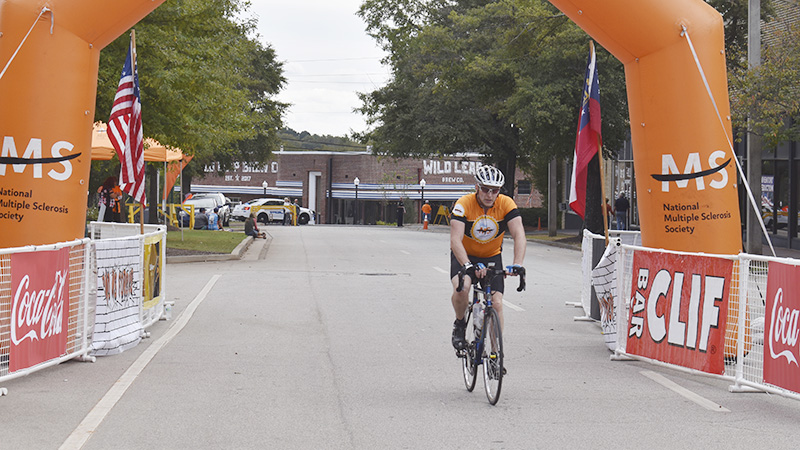 Hundreds of riders took part in the Bike MS: Atlanta Peach Ride 2017 this weekend in LaGrange. This was the second year part of the ride was held in LaGrange. --Gabrielle Jansen

More than 400 people took off on their bicycles outside the AMC Theater on Main Street Saturday morning, riding to raise money in the Bike MS: Atlanta Peach Ride 2017. The money raised from the annual ride will go toward multiple sclerosis research and program for those living with the disease.

This is the second time the ride took place in LaGrange.

Roy Rangel, President of the National Multiple Sclerosis Georgia, said LaGrange was picked again because it felt like a good fit for the race.

“We scouted different areas and when we came across LaGrange, we thought it was a beautiful town. The other side of that coin was that we had people like Bobby [Carmichael, Executive Director of Downtown LaGrange Development Authority] and Barbie [Watts, Director of Promotions and Marketing of Downtown LaGrange Development Authority] willing to work with us and makes sure that it was a great fit for LaGrange not only from an economic standpoint, but also for ourselves as a charity,” Rangel said.

“Everything just seemed to fall into place here.”

While the ride brought out those who loved cycling and or supporting MS research from across the state, it also held meaning for locals with the disease. Pat Hamby, who was diagnosed with MS in 2001, said her family has participated in the ride the last two and three years.

Pat said that while there is no cure for MS, her treatment has been helping her.

“It was a difficult treatment to begin with, but it’s gotten better through the years. There is no cure, but the hope is that medicine that we take is that it will postpone it from getting really bad and it has. It’s working for me,” Hamby said.

Pat’s husband Thelon said his family was proud that the race was held this year in LaGrange.

“We’re just proud to be a part of it,” Thelon said.

Hamby’s daughter, Lucy Winne, said she was also riding for friends, whose names she wrote on her arms for the ride.

Many riders were from the Atlanta area.

Team Shepherd Mobility Works rider Paul Thim said he has been doing this race for seven years after his mother was diagnosed with multiple sclerosis.

“My mom was diagnosed with MS shortly before we started [doing this], but its kept up ever since,” he said.

The 2018 bike ride will be held in LaGrange again and will partner with the completed Courtyard by Marriot hotel, Rangel said.

“We’re very excited to partner with [Courtyard by] Marriot next year. I’m just very pleased with the community that has opened their arms to us,” he said.