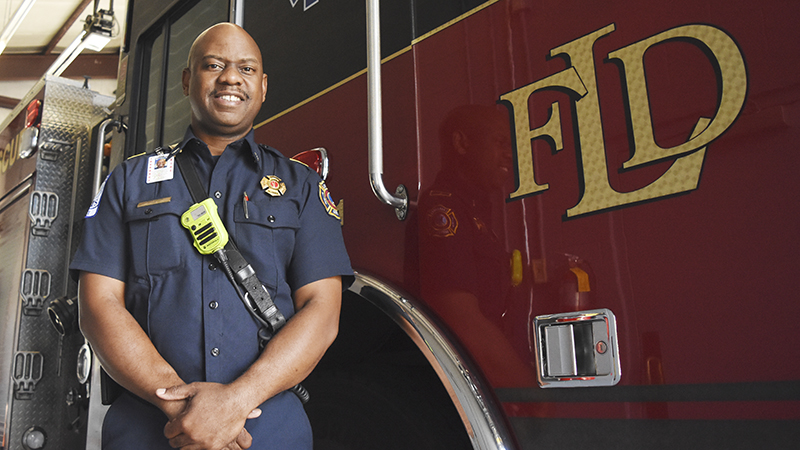 After almost losing his life responding to a fire on Mother’s Day 1994, LaGrange Fire Lt. Chris Taylor is used to the dangers that come with his job. Taylor said he was assigned to assist during a furniture store fire on Lafayette Square when some building debris almost fell on Taylor and another firefighter.

“We were protecting other businesses [on the same block] when this collapse happened, and it happened so quickly I couldn’t respond. I just lunged forward and pushed him inside the building to keep us from getting hit by the debris that was falling from the collapse of the building. We didn’t get hurt, but that moment was a very intense moment,” Taylor said. “The (other) firefighters came over, they pulled us from the debris area and checked on us. Everyone was fine.”

For the fire lieutenant that incident was just another part of the job.

“I think all firefighters may have moments like that in their career, but I think the firefighters who have long lasting careers are the ones that overcome those type of scary moments because our training that we receive and just our abilities to deal with dangerous situations, it comes with the job,” Taylor said.

Taylor said he dusted himself off and reported to work the next day.

“It happened, I was OK and I was ready to get back to work,” he said. “That’s probably one of the moments from my career I will never forget, but it never stopped me from the passion I have for this job and to continue to serve the community and the citizens of LaGrange.”

Before his 25 years of service with the local fire department, the LaGrange native became interested in a career in fire safety in high school.

“During the course of high school, I was exposed to the fire department through the Fire Explorer Program,” he said. “I was about 15-years-old.”

After attending college for a few months, Taylor realized his calling for the fire service.

“I was at college for a quarter and experiencing college life for the time, but my heart was in the fire service as I had already gotten a little taste of what being a firefighter was like,” Taylor said.

“I came home because I wanted to pursue my career in the fire service.”

Taylor then took back a job at Kroger in 1991 and worked there until he was hired by the fire department in August 1992.

In 2006, he became a public information officer and worked in public education for fire safety.

Currently, he is the senior public information officer and the coordinator for education.

Taylor said his passion for teaching and educating is why he likes his current position.

“Just to see the smiles on kids’ faces if a fire truck comes up, or if we’re doing a demonstration, or we’re teaching a presentation, that just warms my heart,” he said. “That’s what it’s all about because that is one of our target groups as it relates to safety, and that’s the children.”

Taylor said while working in the fire service is one of his passions, just touching someone’s life in a small way is also one of his favorite things.

“If I can do something that can put a smile on someone’s face, I think I’ve done my purpose at that point,” he said.

Outside of the fire service, Taylor said he enjoys traveling and is a car enthusiast.