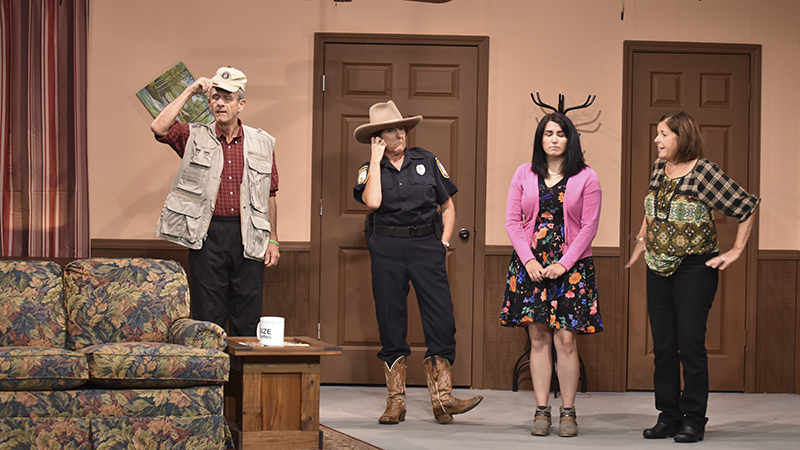 Be prepared to be sore from laughing after New Horizon Community Theatre performs absurd comedy ‘Farce of Habit’ this weekend. The performance is a sequel to the theater’s presentation of ‘Farce of Nature” in 2015.

The setting for the show is a fishing lodge in Mayhew, Arkansas where the owners, their family and guests collide with storylines involving an axe murderer and some nuns.

Backstage at the dress rehearsal Monday, cast members Janet Morehouse, Lydia Johnson and Rick Adams showed how close the cast was, getting into details of the show by finishing each other’s sentences.

“We’ve also got an axe murderer on the loose and a flock of nuns staying the barn roughing it that we don’t see, but we do have three people who appear on stage in a nun’s costume,” all three of them said.

Morehouse, reprising her character, the inn owner Wanelle Wilburn, said returning to her character was natural.

“It’s like you’ve come back and have never left,” Morehouse said. “My husband, (Mike), plays my husband, (D. Gene), so it just kind of feels like it’s comfortable.”

Adams, who plays a different character in this production, said the set was still familiar.

“We knew the set to start with because it’s the same set it was last time,” Adams said.

“[My character] had a heart attack and realized I needed to enjoy life, so this is my first adventure in life,” he said. “I like playing my innocence. Things happen all around him, and he’s just so innocent.”

As serious as the show sounds with a murder and family troubles, Morehouse said there is a lot of jokes and unexpected comedic scenes.

“Even as much as we’ve gone through the play, we were still laughing at some of the lines just hearing them again,” she said. “Things aren’t always what they seem to be in this play.”

Adams said the show is not political and is meant to for audiences to enjoy.

“Don’t come here to study the structure of theatre, but come here to have a good time and laugh a lot, then you’re going to be happy and going to be pleased,” he said. “There’s nothing political in this play at all, not a reference, nothing.”

Although, Adams said there are some innuendos in the show, so families may want to not bring younger children to the performance.

Farce of Habit will be performed Thursday through Saturday at 8 p.m. and again on Saturday at 2 p.m. at the New Horizon Theatre in West Point. For ticket information, visit nhct.org or call (706) 518-6234.