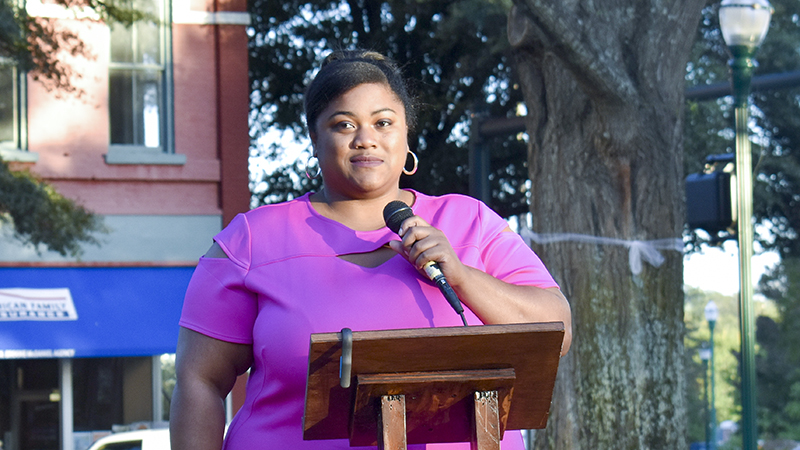 Michele Bedingfield, Harmony House executive director, said the event was meant to unite the community to focus on domestic violence.

“It’s the time we remember those that lost their lives in the last 12 months. We’re going to kind of encourage and empower those that are still living in domestic violence to find a way to get out. And then we’re going to celebrate to those who escaped and who are surviving,” Bedingfield said. “In the last 12 months (in Georgia), there have been 95 deaths due to domestic violence, which is down compared to the 121 we had last year, so there’s definitely improvement.”

Members of Troup High School’s leadership class did a demonstration where each student was the piece of a puzzle to bring awareness and solve domestic violence. Troup County Solicitor-General Markette Baker said bringing awareness to this issue and reaching out to the local resources, such as law enforcement, trauma counseling and even batterers’ intervention programs for the abusers, mean a lot to the community.

Harmony House Prevention and Education Coordinator LeKae Ford read a letter from a survivor about her story and turning to the shelter.

“There is hope and you can survive domestic abuse,” she said. “Harmony House as a national domestic hotline can and will help.”

Bedingfield said supporting victims and survivors is important because they want them to be safe when leaving abusive relationships.

“A lot of times people ask ‘why doesn’t she just leave, or he just leave?’ and it’s not that easy. Leaving is hard and leaving is a process,” she said. “The majority of domestic violence victims that are killed were killed in the process when they were trying to leave, so because of that it’s important that we work with them to stay safe until it’s time to leave.”