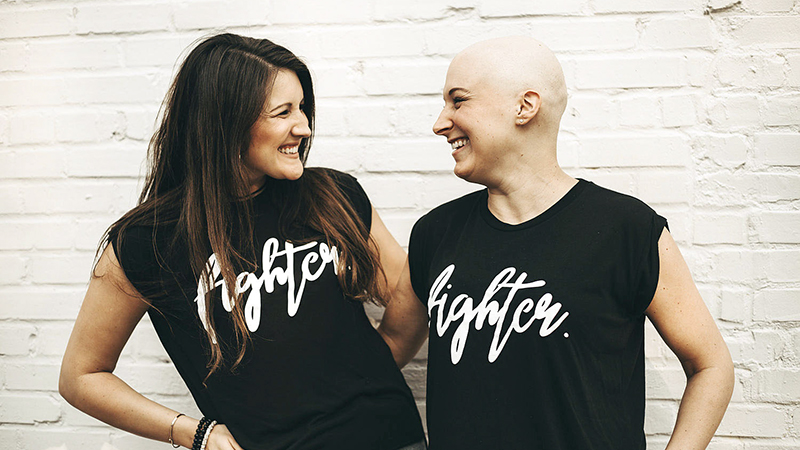 Amanda Rhye, left, poses for a photo with her sister-in-law Jessica Recny showing off their fighter T-shirts. --Indie Fox Photography

Even though it’s been 17 years since LaGrange resident Amanda Rhye was declared leukemia free, it’s still a personal matter to her. Rhye has started Hope XO, a clothing company, along with her sister-in-law, Jessica Recny, to raise awareness and inspire children with cancer, those with breast cancer and their families affected by it.

“Kids with cancer are our cause, but also with my sister-in-law being on our Hope XO team, we want to love on breast cancer fighters too,” Rhye said.

The business is selling shirts with phrases such as ‘hope’ and ‘fighter’ through its online store. Currently it sells a pink collection for breast cancer and what’s known as the launch collection in black and white pieces for adults down to infants.

Rhye said with the sale of every shirt, they put proceeds toward a hope kit to bring to children fighting cancer and their families.

“[Recny and I have gotten] to go to the Ronald McDonald House. We’re going to children’s hospitals to love on families,” Rhye said. “For every purchase in the shop, we’re going to send hope to kids with cancer.”

Rhye said she was diagnosed with acute myeloid leukemia, an aggressive form of blood cancer, when she was 11-years-old. She said at the time of her diagnosis, a little hope would have gone a long way.

“I was given two weeks to live and (there was) not a lot of hope at the children’s hospital. I had to practically live at the hospital for months and months and months at a time,” she said. “My mom always used to say ‘If I [would’ve had] somebody like you come into the hospital room with me and my child who is dying, you would have been just like an angel walking in the room. You would be hope to me.’ All she needed was hope.”

Rhye said she is determined to be that person for children and their families.

“That is why Hope XO is here,” she said. “This is why I lived is so that I could bring hope to those who need it. There are some people that you meet, they don’t make it through and their family had been affected but you can say ‘hey we still have hope. We’re still here as long as there is cancer kick its butt with hope.’

Recny said she and Rhye have also gone to hospitals to give out shirts to breast cancer patients.

“We took the ‘fighter’ shirts and passed them out, and you should see the faces of these guys getting a shirt like ‘yeah!’ They’re being reminded because sometimes it takes that reminder to go ‘hey, you’re a fighter, put your fighter shirt on,’” she said. “It makes you feel like a superhero.”

The two women started planning the clothing line in June before Recny was diagnosed with stage II breast cancer the day after Father’s Day.

Recny said it was then she texted ‘Hope XO’ to Rhye.

“I remember texting Amanda. I said ‘Hope XO because Hope XO is not just for kids with cancer, right? Hope XO is for cancer period,’” Recny said.

Recny said she recently finished her chemotherapy treatments and is scheduled to go into surgery soon. She said she’s been staying positive through her treatment.

“After [the surgery], we’ll go from there,” Recny said. “I’ve just been praising Jesus through the whole thing.”

The clothing line was launched in September because it observes childhood cancer.

The pink collection for breast cancer was launched in October. Rhye said they also plan to sell denim bucket hats with the business’ name on it, modeled after the hat she wore during her treatment, along with publishing a children’s book based off of her own experience with cancer.

Before starting the business, Rhye also worked at Three Life Church with her husband, Joshua, who is the church’s pastor. Recny said she works full-time as an executive assistant at a consulting firm with Hope XO on the side.

Hope XO’s store can be found at hopexo.org.