Two men arrested after $1.6 million worth of marijuana found in tractor trailer 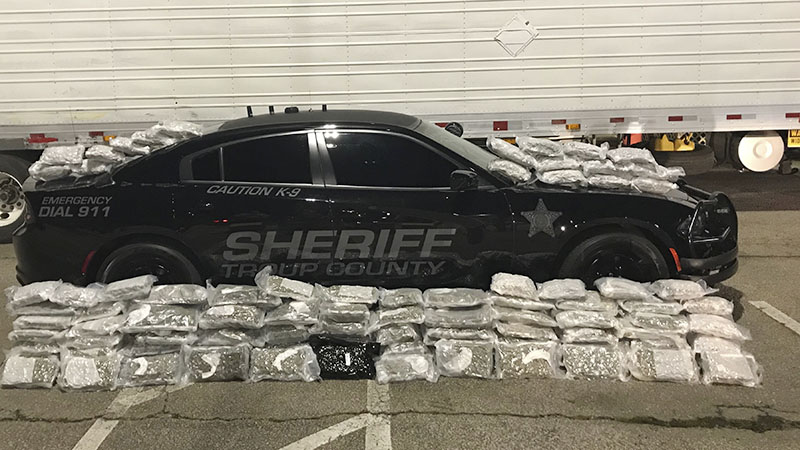 The Troup County Sheriff's Office arrested two men after $1.6 million of marijuana was found in the tractor trailer they were driving. --Contributed

Two men were arrested after more than a million dollars of marijuana was recovered from the back of a tractor trailer on Interstate 85 Thursday night.

A deputy with the Troup County Sheriff’s Office arrested Amaury Izquierdo Mansito and his passenger, Marco Alfaro, after finding 151 pounds of marijuana in the back of the Freightliner tractor trailer they were driving Thursday night at approximately 8:43 p.m., according to a news release from the Troup County Sheriff’s Office. The semi-trailer truck was traveling northbound and was pulled over near mile marker 23.

According to the news release, an officer pulled the tractor trailer over after the driver, Mansito, passed the required exit weigh station and failed to maintain his lane.

After being given consent to search the trailer, the officer used his K9 and the dog alerted him to the marijuana. The marijuana was found in the trailer in boxes, according to Sgt. Stewart Smith.

Mansito also was charged with failure to maintain lane, failure to obey a traffic control device and driving with an expired license.

The high-grade marijuana has a street value of $1.6 million, according to the news release. Because of the large amount of marijuana, investigators from the Customs and Border Protection, Homeland Security Investigators and Georgia Motor Carrier Compliance Division assisted the TCSO. Smith said the drug has been put into evidence.

The men will be booked into the Troup County Jail.