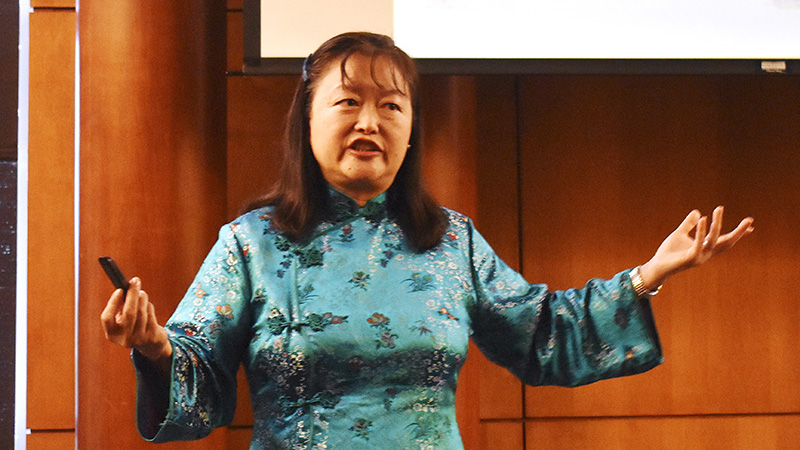 Tuesday morning Lily Tang Williams spoke at LaGrange College about growing up in communist China and why she wanted to come to America. The event was sponsored by the college’s political science program and the Victms of Communism Memorial Foundation.

Williams said she first learned to conform to the communistic society when she was 7-years-old when her friends told on her to a teacher about her plans to join the Young Pioneers of China.

She said this event led to her learning that she could also not trust those close to her at all because neighbors were supposed to spy on each other.

Williams said all children were brainwashed growing up.

She told the female students in the audience that women also had a strict dress code growing up poor in the country.

“You girls are lucky today. You can wear whatever clothes you want, hair style, makeup, earrings, kinds of clothes. Not back then when I was growing up,” Williams said. “Hair cannot go past down your shoulders, no make up, no jewelries, otherwise you’d be criticized as a capitalist lifestyle.”

Even romance was banned from the communistic society because citizens were supposed to only love their dictator Mao Zedong, she said.

“You cannot even really say ‘I love my parents’ because there’s a song we’d sing every day when you went to school. You’d chant ‘I love Chairman Mao, Mao leads communist party’ then we’d do a march, then we’d sing a song ‘I love Chairman Mao, I love communist party,’” Williams said. “We learned at that time we cannot spread any kind of love to members of the opposite sex.”

Williams said the government also controlled how much food families were given, she said.

“We have coupons from the government on how much rice. I would get two pounds of pork every month for a family of five. I’m sure that today you can eat that in one meal,” Williams said. “My uncle taught me how to trap rats in the courtyard. When people were starving they trapped all the animals they could find, so they rounded up animals.”

Williams was 12-years-old when Zedong died. She said the time he was alive and even after his passing, citizens were not allowed to practice any kind of religion.

“Mao became like our god. You cannot believe in any other religion. No other religion was allowed because communism was supposed to be your religion,” she said. “When you have a dictatorship government, you have no choice in what you want to believe in.”

She said there were also detailed records to track citizens without them knowing, Williams said.

“Every year we had to take a standardized picture so the government can track you and know what you look like. So every year, I had to take a picture, but the student file is secret. Besides your household registration, they track each individual starting with student file until you go to a job they call a personnel file,” she said. “That personnel file stays with you all your life until you die. You don’t know what’s inside.”

By the time Williams was in college during the 1980s, she and her classmates started rebelling against the system by breaking curfew, dancing to disco music and even chanting ‘freedom’ and ‘democracy’ during a campus bonfire.

“When I came home, I [told my roommate] ‘this was the most exciting night for me,’” she said.

Williams said she was drawn to coming to the United States when she met foreign students.

“[My classmates and I] were so curious about foreign students and their countries. And an American student told me ‘Lily, I want to show you something. Come to my dorm the next day,’” she said.

She said she was intrigued that Americans had natural rights written in their constitution and that she kept visiting her classmate.

“To go to see a foreign student you need to register what’s your name, what’s your major, where do you live, what are you going to talk about, time in, time out. I went to see him the first time I registered and he showed me a pocket constitution,” she said. “Next time I go back to him, I decided I refused to register. I went to see him more he talked about ‘you can vote for your representatives, you have separation of powers,’ it’s like ‘wow this is a cool country, you have to leave China someday.”

After graduating from college, Williams worked as a faculty member before deciding to come to the U.S.

“I realized I could not reach my dream in China. I could not conform to the society. Every department has a communist party committee, they tell you what to say, how to teach, how to socialize. I had to get permission from [the head of the department] to apply for a passport,” she said. “When I came (here), I couldn’t speak English and only had $100 in my pocket.”

LaGrange College professor John Tures said when he was contacted to organize the event, he found Williams’ story most interesting.

“I had been contacted by a group called Victims of Communism Memorial Foundation and they said ‘would you like a speaker to come in?’ I thought ‘well let me see who the speakers are,’” Tures said. “And most of the people they had were academics like me who lived in America and travelled overseas. I wanted somebody different.”