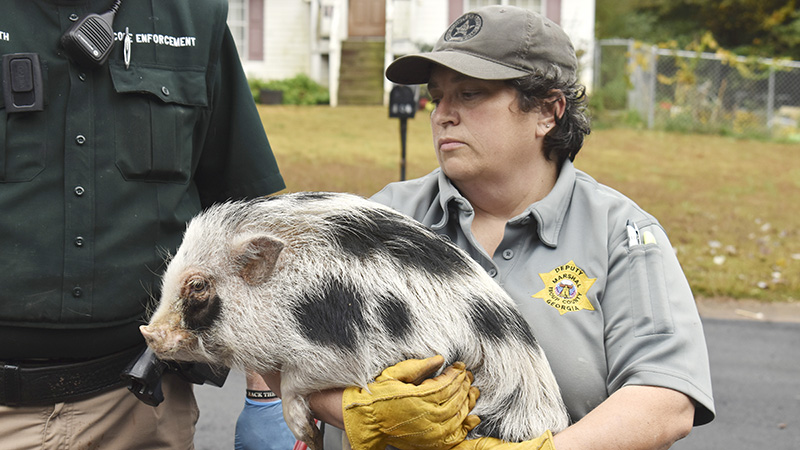 About 20 animals were rescued in Hogansville Thursday morning. --Gabrielle Jansen

Approximately 20 animals were rescued from unsanitary conditions in a house in Hogansville Thursday morning. The animals — which included cats, dogs, pigs, ferrets, a parrot and rabbits — were left in a house that had no power and did not appear to be lived in.

Carlos L. Matias, who owns the house, was arrested and charged with animal neglect and possession of a firearm by a convicted felon, according to a Hogansville Police Department press release. The LaGrange Police Department and Troup County Marshals Office also assisted in taking the animals into custody.

Harr said became sick as they went into the residence because of the smell from feces and urine that had built up in the house.

“The officers could only stay inside the residence for short periods of time without protective masks due to the stench, feces and buckets of urine spread throughout the residence,” Harr said in the press release.

The police department first received a complaint about Matias’ residence Monday and met with him about the animals.

“This started Monday, we received a citizen’s complaint about a number of animals at the location here on Jim Drive. Animal control made contact with [Matias]. We found that there’s quite a few animals on the outside,” said Hogansville Police Chief Brian Harr. “We worked up an enforcement plan for him to take care of the animals, remove them or we would take custody of them. He didn’t do exactly what he should have done so we coordinated with LaGrange and Troup County Marshals and LaGrange Animal Services.”

Neighbor Eve Martin said she called police about the animal situation after noticing that one of Matias’ dogs wasn’t barking. Last Thursday, she walked over to his residence when she saw a dog that looked starved.

“[Matias] would come back every day and stay five to ten minutes, so I assumed he was feeding them. I walked over there and I saw one of the little dogs looking in and it looked like a walking skeleton. So that’s when I called and that’s when the police came out,” Martin said. “Then nothing was really done until an animal control guy came out Monday and looked and then nothing was done until today I thought ‘well maybe I overreacted,’ but now I see I didn’t.”

Harr said the residence was being used just to house the animals.

“There’s no power in the house, it doesn’t look like anyone is living here. It was just utilized to keep animals on the property inside and out. Conditions inside the house are very unsanitary,” he said. “It is very, very unhealthy inside as far air and sanitation.”

Because of the poor conditions the animals lived in, officers were overcome with nausea by the strong smell of ammonia when they first tried evacuating the animals, Harr said.

“It was an overwhelming odor coming from the door, as soon as you opened the door it just really hits you,” Lindsey said. “Several of us got sick.”

Officers arrived around 8:30 a.m. and had evacuated all the animals by 11:45 a.m. Harr said that while the cats and dogs will go to the city of LaGrange Animal Shelter, the other animals will be outsourced after being checked.

“We’ll just make sure to get them taken care of first and move forward,” he said.

Harr said animal hoarding in the county is not common, however this case did not have children involved, unlike the two previous cases that have happened this year.