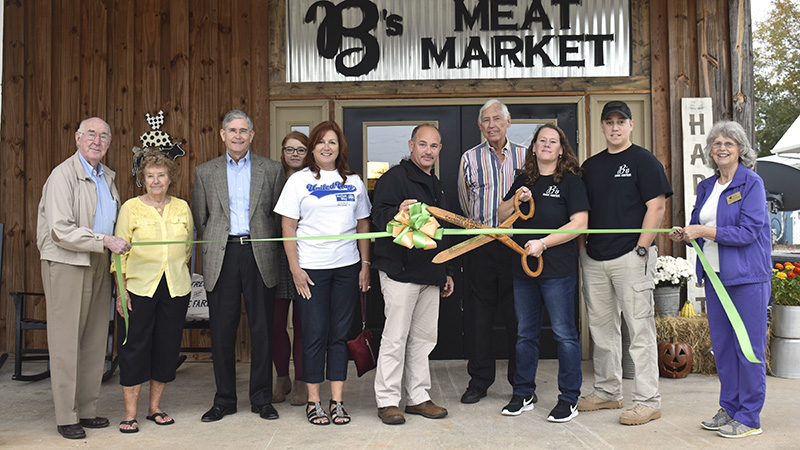 B’s Meat Market held its ribbon cutting ceremony Wednesday afternoon. Co-owner Kelly Swanson and her husband, Hilton, said they opened the butcher shop so LaGrange could have a meats store.

The name comes from her three sons — Brantin, Brody and Brennen, she said.

“We call them B, B One, B Two, and B Three, and just trying to think of a name for it, you always thing of your children first I guess,” Swanson said. “It got named after them.”

Kelly is a former teacher and Hilton works in real estate and law enforcement, she said.

“I needed a change in my profession and in my career, and I decided a meat store was it,” Swanson said. “We kind of went out on a leap of faith and went out on a limb and here you go, it’s here.”

Along with employing a full-time butcher, the store also sells produce and local products, Swanson said.

“We also offer produce, some frozen goods and I have a sweet shop. We’re trying specialize in the local (products). We have Chris Wilkie’s RL Salsa right there on the top shelf. We have Tulla White’s salad dressing,” she said. “We’re contacting other local businesses around LaGrange, Pine Mountain, Hogansville area and want to start carrying their things as well. We’re trying to be something different and unique, that specializes in top premier meat, but showcasing our locals and their products.”

“That’s what we want to be known as is the one stop shop,” she said. “We don’t want you to have to leave and go to Walmart on your way home, we want you to get everything here.”

B’s Meat Market is located at 3452 Hogansville Road and is open Tuesdays through Saturday from 10 a.m. to 6 p.m.