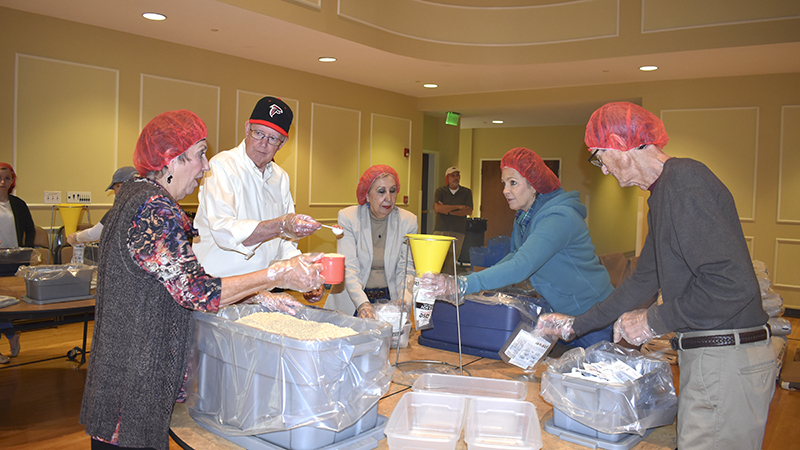 Community members with the First United Methodist Church of LaGrange partnered with Rise Against Hunger to make more than 20,000 meal packets Sunday afternoon. Senior Pastor Brian Germano said about 100 volunteers made 20,088 bags this year as opposed to the 12,000 they made previously.

The meal kits were made with soy, dried vegetables, protein and rice. Germano said one bag was equal to six meals.

The event was open to the community, he said.

“The cool thing about this is we can do this together as the body of Christ. It doesn’t have to be a certain age that’s for certain groups for anyone. We had it in the afternoon so if there were people who went to other churches who wanted to join us, [they could]. Our college folks could join us. We had a few of those. We had our Korean congregation join us, and we had some other Korean congregation join us as well,” Germano said. “Last year we had it during the worship time and that was good to sort of introduce it to our congregation, but this year we wanted it to not just be our congregation. We wanted to open it up in the community.”

Germano said the event was an opportunity for the ministry to feed the hungry like Jesus.

“It’s a really great experience for us because it’s an opportunity for the church to be the hands and feet of Jesus to do what He’s calling us to do,” he said.

Germano said he doesn’t know where the packets will be sent to in the world, but it was a great experience with the community.

“When there’s a need around the world identified, [Rise Against Hunger] ships them out. We’ll get word later this year or the first of next year where those are shipped,” he said. “It feels good to feel like you’re really making a difference. That’s a good feeling to know that you’re bringing life to other people around the world.”

“We look forward to a time where we can invite the community to be a part of that as well,” he said.