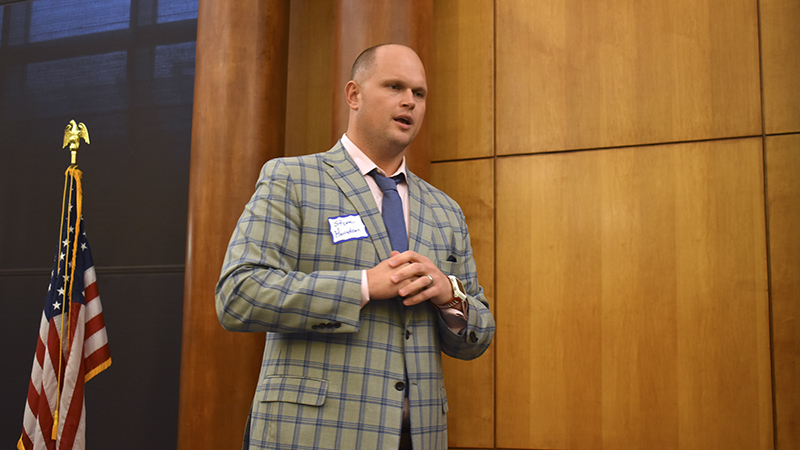 “I’m Steve Herndon. I’m a drug and alcohol addict. As I also talked about in my morning breakout session, I am also a person in long term-recovery,” Herndon said. “The more I own it and say it in front of the world, the better off I am at having a continuing successful long-term recovery.”

Shannon Lawson, TCPC project coordinator, said the event is to train community members in substance abuse prevention information. She said the group was glad to have Herndon as a guest speaker.

“He’s a local boy, graduated from Troup High School, an outstanding football player, played at [the University of] Georgia, played in the NFL,” Lawson said. “He also has a very rich recovery from substance abuse story, and he’s sharing it today during lunch.”

Lawson said the TCPC also recognized local community leaders who are partners in prevention — Debbie Burdette, Sheriff James Woodruff and TiShari McFarland — at the beginning of the event.

“[Burdette] also has a passion to make sure our teens are healthy and drug free and she served on our coalition doing many years of just that,” she said. “The [Troup County] sheriff’s office was one of the first locations for our old drug drop off box, and they’ve been very committed to that process for many years. We wanted to recognize not only the sheriff but also the department. McFarland leads the Teen Maze cause every year and what great efforts and through our partnership and several other community partnerships, Teen Maze has made a difference in the lives of our teens.”

Herndon said he grew up without a relationship with his alcoholic father and that he didn’t want to be like him. Herndon said he first got into football because it was like getting a rush of dopamine every time he was praised.

“It was the mere fact of the presence of drinking that really escalated my disease when it did have the ability to take off. Ultimately, I was seeking validation my whole life, and I found it in the form of football,” he said.

“I realized that when I hit people on the football field, I got a pat on the butt and an ‘atta boy.’ I just seeked that. It was like the first drug in my life.”

Herndon said his mother married his step-father when he was 5-years-old and that he grew up drug and alcohol free. His first experience with alcohol came when he was being recruited by colleges.

“If you are aware of the recruiting process, they talked about how there’s a lot of wining and dining going on. When your first time drinking alcohol, you get drunk and you turn into a power ranger, that’s a warning sign,” he said.

Herndon said by the time he was in college he would justify staying out all night as long as he was the first lesson on the practice field.

“The same validation that football gave me, drugs and alcohol gave me. So, when I got to the University of Georgia, the hole that I had in my soul when I was a five-year-old boy was finally being filled both on the field and off the field with drugs and alcohol,” he said.

Herndon said he got into drugs after taking too much pain medication one time after surgery his senior year of college. He went undrafted, but signed with the Denver Broncos in 2000.

One of Herndon’s saddest moments was when he was playing against the Oakland Raiders and all he was thinking about during the game was getting drunk and high, he said.

Herndon struggled for years after that, saying he drug his wife through the ringer, failed drug tests with the Atlanta Falcons and almost lost his life multiple times.

By the time he failed and retired with the Falcons in 2005, his family intervened, he said. Herndon said even though it has been more than a decade since he became sober, recovery is still a long process.

Herndon said to recover, those addicted have to ask for help and be humble through the process.

“The only way you’re going to have success and long-term sobriety is by surrendering and asking for help. That’s really the bedrock of my recovery is the humility that I try to walk with today,” he said.