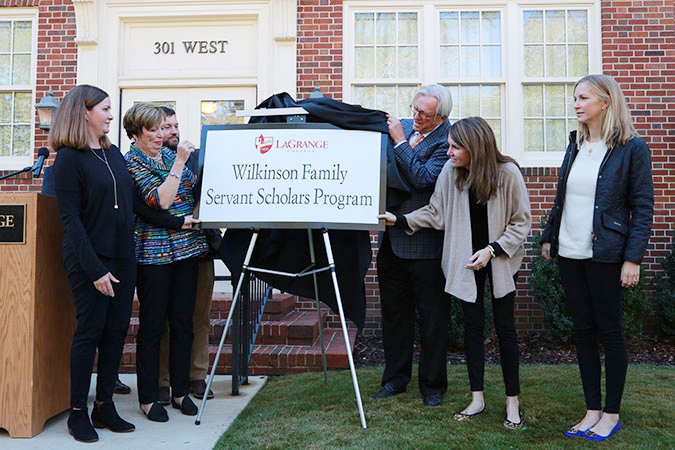 Atlanta businessman Jerry Wilkinson and his family have donated $1 million to LaGrange College to support its “From Promise to Prominence Campaign,” specifically the institution’s Servant Scholars Program.

Wilkinson, a member of the college’s Board of Trustees, is the founder and chairman of The Wilkinson Companies, a real estate management firm. Since 1984, he has directed the operations and growth of the company and its subsidiaries, including properties in LaGrange.

College President Dan McAlexander said he is honored and humbled by the donation.

“I am profoundly grateful for this generous, transformative gift in support of our Servant Scholars Program,” he said.

“The Wilkinson family has a deep passion for and commitment to serving others. Their support will help this program become a national model for how students at small liberal arts colleges can transform the community in which they live through service, finding themselves transformed as a result.”

“The Wilkinson family is pleased to make this investment in LaGrange College,” said Jerry Wilkinson.

“I have been coming to LaGrange as an investor and business operator for over 35 years and have found the city to be progressive, pro-business and welcoming. A centerpiece of LaGrange is the college with its long history of serving the community and region.

“The Servant Scholars Program provides a solid educational foundation as well as fosters a passion to lead by serving others,” he said.

“We, as a family, look forward to building on the existing program to touch and change lives wherever the student goes.

“This is an opportunity to give back from the blessings we have received.”

Dr. Jack Slay, Director of the Servant Scholars Program, said he is “overwhelmed and beyond excited” by Wilkinson’s gift.

“This presents tremendous opportunity for the program and opportunities for the 24 Servant Scholars to lead and experience in ways we’ve not had before,” Slay said. “I look forward to seeing where the Wilkinson family’s generosity leads the program and the students.”

Scott Hawkins, Chairman of the Board of Trustees, said he has known Wilkinson for years, and isn’t surprised at his friend’s gift.

“Jerry and his entire family have always been enthusiastic supporters of higher education and service to the community,” Hawkins said. “I’m thrilled that he appreciates the mission of this institution and wants to be a part of its growth.”

Wilkinson received a bachelor’s degree in electrical engineering from Duke University and an MBA in finance from the Wharton School at the University of Pennsylvania. He also has done postgraduate work at the Harvard Business School. He earned his Certified Commercial Investment Member designation, writes for national publications and is a guest lecturer at various organizations and schools.

He and his wife, Beverly, have three daughters and eight grandchildren, and split their time between Atlanta, Georgia, and Amelia Island, Florida.

Nonprofit for veterans opens up in LaGrange